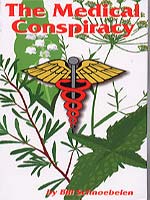 The Cost of Spilled Milk

Walnuts, milk and vitamins are good for us! But that doesn't stop the world's ruling bureaucracy from reaching its tentacles into our farms, families and food stores. Their global regulations will entangle all of us, whether or not we like milk and walnuts.

In his article, "The EPA versus spilled milk," Thomas Sowell opens a window into this ominous process:

"...the EPA has decided that, since milk contains oil, it has the authority to force farmers to comply with new regulations to file 'emergency management' plans to show how they will cope with spilled milk, how farmers will train 'first responders' and build 'containment facilities' if there is a flood of spilled milk.

A week after pondering the threats of "spilled milk," I read an article titled the "The FDA claims walnuts are drugs." I had just come home from our supermarket with two bags of shelled walnuts packaged by Diamond of California. They were on sale, and I can see why. Our Washington bureaucrats at the Food and Drug Administration [FDA] had warned Diamond and sixteen other food companies that their product labels violate the Federal Food, Drug, and Cosmetic Act. Here's their main point:

"...because of these intended uses [enjoying the nuts and seeking the health benefits of the Omega-3 fats in walnuts], your walnut products are drugs... Therefore…they may not be legally marketed with the above claims in the United States without an approved new drug application."[2]

The producers had 15 days to reply. What kinds of hurdles must they face to stay in business?

Do you wonder what's going on? Are these examples of government control simply a means to employ more people? Or are they a ploy to train freedom-loving Americans to surrender their rights and submit to intrusive micro-management? Or are they simply a plot to empower a global web of bureaucracies and enrich large corporations that support our lawmakers and fund this agenda?

A good place to start the search for answers is the Codex Alimentarius Commission website:

"The Codex Alimentarius Commission was created in 1963 by FAO [the UN Food and Agriculture Organization] and WHO [the UN World Health Organization] to develop food standards, guidelines and related texts such as codes of practice under the Joint FAO/WHO Food Standards Programme. The main purposes of this Programme are protecting health of the consumers and ensuring fair trade practices in the food trade, and promoting coordination of all food standards work undertaken by international governmental and non-governmental organizations."[3]

That may sound good to trusting souls, but don't be deceived. Like most UN agencies, both WHO and FAO were founded on socialist values and funded by wealthy globalists such as the Rockefellers and J. P. Morgan. Codex, their offspring, shows the same inclination to feed on corporate enticements and political corruption. Here are some of its intrusive agencies:

CCMAS - Codex Committee on Methods of Analysis and Sampling

CCRVDF - Codex Committee on Residues of Veterinary Drugs in Foods

There's even a "Codex Committee on Milk and Milk Products" designed "to elaborate world-wide standards, codes and related texts for milk and milk products."

That fits the agenda of its US partners at the EPA [Environmental Protection Agency].  The latter now requires farmers "to prepare and implement an emergency management plan in the event of a milk catastrophe."

In other words, Codex is a major player in today's rising pyramid of surveillance and control. Do you wonder how many tax-paid employees are needed to keep up with all the bureaucratic regulations at the DA (Department of Agriculture) and DHHS (Department of Health and Human Services)?

Many articles have been written on this complex topic, but few state the issues as simply as Rufina James in her report titled "The Sinister Truth Behind Operation Cure All." She writes,

"Behind the Codex Alimentarius Commission is the United Nations and the World Health Organization working in conjunction with the multinational pharmaceutical cartel and international banks. Its initial efforts in the US with the FDA were defeated, so it found another ally in the FTC [Federal Trade Commission]....

"Codex began simply enough when the U.N. authorized the World Health Organization and the Food and Agriculture Organization to develop a universal food code. Their purpose was to 'harmonize' regulations for dietary supplements worldwide and set international safety standards for the purposes of increasing trade...

"Pharmaceutical interests stepped in and began exerting their influence. Instead of focusing on food safety, Codex is using its power to promote worldwide restrictions on vitamins and food supplements, severely limiting their availability and dosages....

"While the stated goal of Codex is to establish unilateral regulations for dietary supplements in every country, the actual goal is to outlaw health products and information on vitamins and dietary supplements, except those under their direct control. These regulations would supersede United States domestic laws without the American people's voice or vote in the matter."[7]

Does that mean we must submit to international conventions rather than to our Constitution?

Actually, our government has been yielding to international "laws"[8] since the United Nations was founded in 1945 under the leadership of its first Secretary General, communist Alger Hiss. Spreading like algae in a dying lake, this global bureaucracy is no longer hidden from sight. As Rufina James explains,

"...the federal government must NOT ONLY CHANGE FEDERAL LAW, but must also require state and local governments to change their laws to be in accordance with international law.

"...Codex is now enforceable through the World Trade Organization (WTO). If a country disagrees with or refuses to follow Codex standards, the WTO applies pressure by withdrawing trade privileges and imposing crippling trade sanctions....

"The United States has already lost seven trade disputes despite the exemption clause. Due to the enormous pressures put on them by lobbyists from multinational corporations (who contribute millions to congressional campaigns), Congress bowed to pressure and changed U.S. laws.... Food control equals people control — and population control....

"The United States, Canada, the Europeans, Japan, most of Asia, and South America have already signed agreements pledging total harmonization of their laws, including food and drug laws, to these international standards...."[7]

"In Germany and Norway, where the Codex proposals are already enshrined in law, even Vitamin C (above 200mg) is illegal, except by prescription and then only from the pharmaceutical company that supplies the medical system. But first you have to convince your doctor you need it.

"All this is happening despite recent reports such as that from Harvard University....The longitudinal study of nearly 100,000 nurses over 20 years shows that folic acid (B vitamin) supplements reduce cancer of the colon by a huge 75 to 80 per cent...

"But perhaps the pharmaceuticals industry, despite its power, is just a little worried. Last week the New York Times reported that the Pharmaceuticals Research and Manufacturers of America would increase its lobbying budget by 23 per cent to US$150 million... in the coming year. Its budget includes more than US$2.5 million for such things as an 'intellectual echo chamber of economists and thought leaders' (read journalists)...

"The bottom line is that you're 26,000 times more likely to die from properly researched, regulated, prescribed and used drugs than dietary supplements. Whether those supplements are effective preventative measures, you'll have to decide for yourself. But somehow the behaviour of the pharmaceutical companies makes me suspicious that the researchers at Harvard and Johns Hopkins and all those vitamin and mineral advocates might be right after all."

Attempts to stop this UN-WTO assault on American liberty

On March 20, 2001, a joint Statement by Congressmen Ron Paul and Peter DeFazio was submitted to the House Committee on Government Reform

. Its implications are disturbing, to say the least. Remember, the real issue is freedom, not food control. The latter is simply an illustration of a far larger picture of coming tyranny:

"Despite DSHEA, officials of the Food and Drug Administration (FDA) continued to attempt to enforce regulations aimed at keeping the American public in the dark about the benefits of dietary supplements....

"Codex is the vehicle through which the World Trade Organization (WTO) is working to 'harmonize' (e.g. conform) food and safety regulations of WTO member countries....We are concerned that the end result of this process will force the United States to adopt the same strict regulations of dietary supplements common in European countries such as Germany, where consumers cannot even examine a bottle of dietary supplements without a pharmacist's permission.

"If Congress were to refuse to 'harmonize' US laws according to strict Codex/WTO guidelines, a WTO 'dispute resolution panel' could find that the United States is engaging in unfair trade because of our failure to 'harmonize' our regulations with the rest of the world...

"...in a dispute with a country that has adopted the Codex standards it is highly probable that America would lose and be subject to heavy sanctions.... Harmonization may be beneficial for the large corporations and international bureaucrats that control the WTO but it would be a disaster for American consumers of dietary supplements!"[10]

Did you catch that? Read the last two paragraphs again. They are critical to understanding the entangling web of control that's spreading over our planet. Remember, the real issue is not limited to food and supplements. The global bureaucracy intends to micro-manage everything -- schools, beliefs, values, parenting, migration, etc. -- using similar tactics that would bind all the links of the oppressive chains together.

That brings us back to the broader picture. How can we prepare our children for the hardships ahead? How will they maintain their faith when their peers equate God's truth with hate? Will they dare to stand up against evil in a world that tolerates everything except God's moral values?

Perhaps we can learn some lessons from the persecuted Christians in Islamic and Communist lands. If you have children, you might start by reading

The Armor of God and "true stories for children."

Please pray with me that God will give us the love, strength, hope and endurance needed to demonstrate His victory in the midst of the spreading corruption.

"Thanks be to God, who gives us the victory through our Lord Jesus Christ!"1 Corinthians 15:57

See also Trading U.S. Rights for UN Rules and From Freedom to Servitude

5. "Codex Committee on Milk and Milk Products" at www.codexalimentarius.net/web/comm_info.jsp?id_lst=19.

7. Rufina James, "The Sinister Truth Behind Operation Cure.All" at www.therealessentials.com/sinistertruth.html

8. Read Trading U.S. Rights for UN Rules and The UN Plan for Your Mental Health.

If you have never accepted Jesus Christ as Savior, but have come to realize His reality and the approaching End of the Age, and want to accept His FREE Gift of Eternal Life, you can also do so now, in the privacy of your home. Once you accept Him as Savior, you are spiritually Born Again, and are as assured of Heaven as if you were already there. Then, you can rest assured that the Kingdom of Antichrist will not touch you spiritually.
If you would like to become Born Again, turn to our Salvation Page now.