Subtitle: Since pictures are worth 1,000 words, we have created an article in which we show you that Freemasonry utilizes many of the identical symbols as does hardcore Satanism.  The chances of these many common symbols being used accidentally is so high as to be impossible.

Too many times, Masons and Christians get into an endless exchange of emails trying to convince each other that they are right:  Masons argue that I am presenting a totally false view of Masonry, and usually end their argument with the statement, "I have never seen anything like that is my Lodge"!  We Christians realize that the reason these Masons have never seen anything like what we are divulging is that the Masonic Fraternity consists of two organizations, on Visible and one Invisible.  We have written an extensive article on this subject, https://www.cuttingedge.org/free001a.html "TWO ORGANIZATIONS, ONE VISIBLE, THE OTHER INVISIBLE".

Since the old adage is certainly true that a "picture is worth a thousand words", we have written this article to demonstrate that Freemasonry uses many of the same filthy occult symbols that Satanists use.  As I have delved deeply into Satanism over the past 16 years, I have constantly discovered that Satanism uses the same symbols as does Freemasonry; since Satanism goes back 4,000 years, and Freemasonry only about 300, you can easily see that Freemasonry has gotten many of its symbols from Satanism.

Finally, if you do not recognize some of the occult interpretations of some Masonic/Satanic symbols, remember that you have been given false interpretations of those symbols, just as Albert Pike directed:  "Masonry, like all the Religions, all the Mysteries, Hermeticism, and Alchemy, conceals its secrets from all except the Adepts and Sages, or the Elect, and uses false explanations and misinterpretations of its symbols to mislead those who deserve only to be mislead; to conceal the Truth, which it calls light, and draw them away from it." [Morals and Dogma, p. 104-5, 3rd Degree]

Did you see those words, "uses false explanations and misinterpretations of its symbols"?  In most instances, I will be quoting from both a Satanic source and a Freemason, usually an Inner Fraternity Mason, to explain the interpretations of these symbols.

COMMON SYMBOLS USED BY BOTH SATANISM AND FREEMASONRY

ALL-SEEING EYE -- The All-seeing eye originated in Egypt in those Satanic Mysteries which God physically judged during the time of Moses, when he lead the Israelites out of the land by the mighty hand of God.  The All-Seeing Eye was representative of the omniscience of Horus, the Sun God, [Magic Symbols, by Frederick Goodman, p. 103, Satanic symbols book].  As one Masonic book says, "These considerations lead us to an interesting topic, the Eye of Mind or the Eye of Horus ... and conveying the idea of the 'All seeing Eye'.  The end set before the Egyptian neophyte was illumination, that is to be 'brought to light'.  The Religion of Egypt was the Religion of the Light". [Thomas Milton Stewart, The Symbolism fo the Gods of the Egyptians and the Light They Throw on Freemasonry, London, England, Baskerville Press, Ltd., 1927, p. 5]

Anyone who knows their Scripture and thinks of themselves as "Christian" should feel right now like they have been slapped alongside their head with a two-by-four!  This Masonic author has just told you that the Light to which Masons constantly refer, and toward which they are to constantly move, is the Religion of Horus!  This is damning, because in Egyptian Mythology, Horus IS Lucifer [Former Satanist, William Schnoebelen, Masonry:  Byond The Light, p. 197]

However, the evidence that Lucifer is the god of Masonry resides elsewhere in the writings of the Invisible Fraternity.  Albert Pike writes in Morals and Dogma that Lucifer is the "light-bearer" [p. 321, teachings of the 19th Degree], and is the "Angel of Light" on p. 567, teachings of the 26th Degree].  Finally, Masonic author, Manly P. Hall, says that, once the Mason really learns the secret of his Craft, he shall have the "seething energies of Lucifer in his hands". [The Lost Keys To Freemasonry, published by the Macoy Publishing and Masonic Supply Co., 1976, p. 48]

However, Freemasonry also depict this Eye of Horus within a pyramid.  All Satanists love the pyramid, because it represents the Pagan Trinity of Satan, Antichrist, and False Prophet.  They use this 3-sided geometric shape constantly.  In this symbol, called the Euclid, we see that the All-Seeing Eye is positioned above the traditional Masonic symbol of the Compass/Square, with the "G" in the middle.  This means that the All-Seeing Eye controls Freemasonry, which is exactly correct. 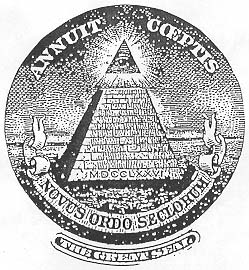 However, this symbol of the All-Seeing Eye within a pyramid was appropriated in 1776 by the Illuminati.  [Robert Hieronimus, Ph.D., America's Secret Destiny, White Magic book, p. 59]  In 1789, a secret meeting of Masonic members of the Constitutional Congress approved the symbol, but declared it should be kept secret.  These Masonic members of the Constitutional Congress rightly feared the general public would immediately recognize this symbol as being Masonic and reject it outright.  You see, the General Awakening Revival had been underway since the mid-1740's, resulting in perhaps one-half of the population in the American Colonies being Born Again Christian, a proportion never to be seen again. 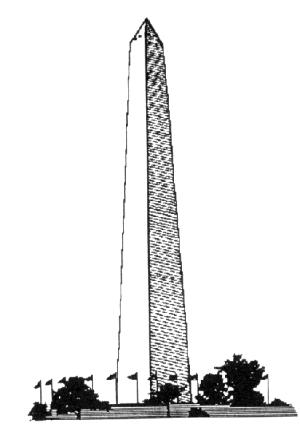 All pagans love to worship the creature rather than the Creator [Romans 1:25]; therefore, every single pagan group in the world worships the Sex Act.  Both Satanism and Freemasonry absolutely love the Obelisk.  The Egyptians created the obelisk, believing that the spirit of the Sun god, Ra, dwelt in there. [H.L. Hayward, Symbolic Masonry:  An Interpretation of the Three Degrees, Washington, D.C., Masonic Service Association of the United States, 1923, p. 207; 'Two Pillars' Short Talk Bulletin, Sept., 1935, Vol. 13, No 9; Charles Clyde Hunt, Some Thoughts On Masonic Symbolism, Macoy Publishing and Masonic Supply Company, 1930, p. 101]

Satanists -- and Invisible Masons -- also depict the obelisk as the erect male organ. One Luciferian author writes that "... the lingam [male phallus] was an upright pillar" [W. Wynn Wescott, Numbers: Their Occult Power and Mystic Virtues, Theosophical Publishing Society, 1902, p. 33]  A Masonic author both admit that these pillars of the obelisk were used to represent sex [Haywood, quoted above, p. 206-7 and Rollin C. Blackmer, The Lodge and the Craft: A Practical Explanation of the Work of Freemasonry, St. Louis, The Standard Masonic Publishing Co., 1923, p. 94]

In the Bible, we see the obelisk in use in Baal worship, the priests killed on God's orders, and the obelisks destroyed.  Listen to the account i which God destroyed these obelisks:  ""… King Jehu said to the guards and to the officers, 'Go in and slay them; let none escape'. And they smote them with the sword; and the guards before the king threw their bodies out, and went into the inner dwelling of the house of Baal. They brought out the obelisks [pillars] of the house of Baal and burned them." [2 Kings 10:26, Amplified Bible]

The next time you see an obelisk in your Freemasonry organization, you now know you are looking at one of the supreme objects in Baal worship, for which God ultimately destroyed Israel.  You are also tolerating a Satanic symbol of the sex act.

CIRCLE WITH A DOT

Since the Satanist worships the Sex Act, he must have a symbol of the female organ, to go along with the male organ -- the Obelisk.  And, indeed, Satanists do have a symbol of the female organ -- the Circle. And, when a point is added to the middle of the circle, you have the complete sex act, the male being the point and the female being the circle ["Point Within A Circle", Masonic Short Talk Bulletin, August, 1931, Vol. 9, No. 8, Reprinted July, 1990, p. 4.]

Listen to Albert Mackey, a 33 Degree Mason, describe this Satanic belief:  "The point within the circle is an interesting and important symbol in Freemasonry ... The symbol is really a beautiful but somewhat abstruse allusion to the old Sun-Worship, and introduces us for the first time to that modification of it, known among the ancients as the worship of the Phallus." [Short Talk Bulletin, February, 1936; Vol. 14, No. 2, Reprinted July, 1980, p. 7].  Isn't this wonderful?  Mackey tells us that this point within a circle is really the old Sun Worship which Masons have copied the Ancient Mysteries Religions to modify it as a phallus symbol.

"The Indian interpretation makes the point the male principle, the circle the female; the point became the sun and the circle the solar system which anicent peoples thought was the universe because the sun is the vivifying, the life-giving principle, for all that lives."

We will be adding to this article as time allows, for there are so many other symbols that Freemasons use that regular, run-of-the-mill Satanists use that your mind will be boggled.

But, let us end our discussion about this Dot Within A Circle symbol by noting that Adam Weishaupt, the Satanic priest of the Masters of the Illuminati, who formed the New World Order Plan to produce Antichrist, used this symbol to represent his Satanic coven.  Listen:

"Because the true purposes of Illuminism were so shocking, Weishaupt constantly encouraged the secretive nature of the order.  No member was ever allowed himself to be identified as an Illuminati.  The words Illuminism or Illuminati were never to be used in correspondence, but were to be replaced by the astrological symbol of the sun, a circle with a dot in the middle." [William Still, New World Order:  The Ancient Plan of Secret Societies, Lafayette, Louisiana, Huntington House, Inc., 1990, p. 73]

The Masters of the Illuminati, the most Black Magick Satanic group in all of human history, uses the symbol of a dot within a circle to represent its group.  You can find this dot within a circle in Freemasonry.  This is hardly a coincidence, and one of the more definitive proofs that Masonry is Satanic.

Truly, the End of the Age, along with its unparalleled deception, is upon us.