Three New Hoggard DVD's - The Best He Has Ever Done! 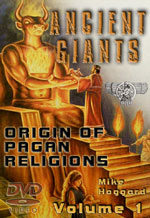 In Volume 1, entitled, "Ancient Giants- Origin of Pagan Religions", Pastor reveals that, not only did Giants exist in the Ancient World, but their teachings to mortal men created the various Pagan Mysteries Religions of Babylon, the Egyptian Mysteries, the Chaldean Mysteries and a whole host of lesser pagan religions.

Imagine this revelation! Satan used the Giants to actually create the various Pagan Mysteries Religions which scourged the Ancient World. We see their introduction to the world in Genesis 6, as the giants resulted from copulation between fallen angels and human women.

Israel had no greater enemy than the Pagan Mystery Religions. These pagan systems of worship not only opposed God's true religion, but they were possessed of a powerful spirit of deception which continually drew Israel's people into its trap, from the kings to the average citizens.

God constantly brought Israel into judgment for her embrace of pagan religions which demanded human sacrifice and which offended God in so many different ways. And, now we learn the incredible truth, that Satan himself created these many pagan religions through the Giants! 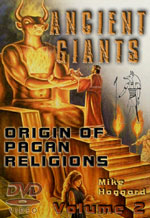 Pastor Hoggard continues his masterful expose' of how the demonic Ancient Giants created the various pagan religions to which Israel succumbed time after time after time.

Hoggard's examination of these many Ancient Pagan Religions will fascinate you and educate you. You will understand the Old Testament like you have never understood it before.

Mike shows how the Giants established the Ancient Egyptian Mysteries Religion, which is still today the greatest example of Witchcraft the world has ever seen. End Times prophecy abounds with references to modern nations and religious systems which God calls "The Mysteries". 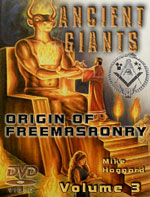 Pastor shows example after example where the legends of Freemasonry abound with the names of gods and goddesses which were created by the Giants. This DVD is a scathing indictment of Masonry and will enable you to understand how true the Masonic Title is 'Ancient and Accepted' Freemasonry.

Furthermore, since the Giants created all Mystery Religions, this statement by Masonic Master, Albert Pike, makes more sense. Pike says in 'Morals And Dogma' that 'Masonry is identical to all the Mysteries'. This DVD is a great witnessing tool to any Mason in your life.