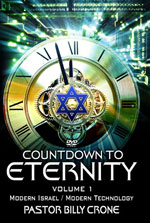 The 'Final Countdown' takes a look at 10 signs given by God to lovingly wake us up so we'd give our lives to Him before it's too late. These prophetic signs are many, but there are 10 REALLY IMPORTANT ones to which we really need to pay attention.
These 10 prophetic signs are: 1) The Jewish People and their reborn nation, Israel; 2) Modern Technology; 3) Explosion of Worldwide Unrest/ Upheaval; 4) Unprecedented Falsehood; 5) Rise of Wickedness and Perversion; 6) Rise of Religious Apostasy; 7) One World Religion; 8) One World Government; 9) One World Cashless Economy; 10) The Mark of the Beast.

This 2-DVD set addresses two of these issues:

The Jewish People and their reborn nation, Israel in three aspects:

* Reborn as Israel
* Rebuilding of the Temple
* Relationship to the coming Antichrist.

NOTE: The trailer we show covers all 10 of these prophetic areas which are unfolding right in front of our eyes. 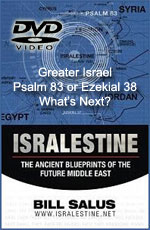 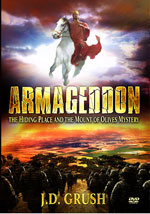 I. Israel is nervous today as the radical Muslim Brotherhood candidate is the new Egyptian President!

"THE Muslim Brotherhood's Mohamed Mursi won the bitterly contested race for Egypt's first democratically-elected president last night, prompting scenes of jubilation among the thousands gathered in Cairo's Tahrir Square to hear the results. Dr Mursi won 51 per cent of the vote, while his rival, Ahmed Shafiq, a former air force general who served as prime minister in the dying days of the regime of Hosni Mubarak, won 48 per cent."

No one should be surprised that radical Islamic forces take control of the government whenever the people have any say in the matter. As Bill Salus so correctly states in his DVD, "Isralestine", Islamic people today are possessed by the same spirit of "Ancient Hatred" toward Israel as their ancestors over 3,000 years ago. God is going to bring judgment upon all Islamic peoples because of this horrific hatred which has been systematically passed down from generation to generation.

We posted a new Headline News article last week which has great bearing upon the future of Israel and of the Middle East. We entitled this article, "What Will Happen When Israel Refuses Integration Into Club of Rome Supernation #7? Is this refusal to integrate into an Arab-dominated Supernation be the catalyst for fulfillment of Zechariah 12?" NEWS2475.

Not surprisingly, Israel is said to be very nervous about Egypt's new radical president.

"The Muslim Brotherhood victory in Egyptian presidential elections, announced Sunday, has raised fears in Israel that its strategic 1979 peace agreement with its southern neighbor could be in danger."

This treaty cost Egyptian President Anwar Sadat his life, as he was assassinated within days of signing the document. Fortunately for Israel, President Mubarak faithfully implemented the treaty. The key provision of this treaty was that Egypt agreed to keep only limited military forces in the Sinai desert, thus allowing Israel a badly-needed buffer zone. The IDF would have days of warning that an Egyptian attack was coming. If hostile enemy forces were allowed to amass on Israel's southern border, the IDF would have no warning whatsoever that an attack was imminent.

For 31 years, this treaty has stood, giving Israel a huge boost in security. Now, that situation is likely to dramatically change.

"Israel's peace agreement with Egypt, its first with an Arab country, is a cornerstone of Israeli security. The agreement ended decades of hostilities, with to five wars and thousands of deaths. While relations have never been warm, Egypt has upheld the deal, keeping its bordering Sinai peninsula largely demilitarized, allowing the Israeli military to focus on other hostile borders with the Palestinians, Syria and Lebanon."

For the time being, the Muslim Brotherhood is saying all the right diplomatic statements.

"The Muslim Brotherhood ... has indicated pragmatic willingness to accept the existence of Israel. Addressing his nation Sunday evening, Morsi declared he had a 'message of peace. We will respect all international agreements', he said, without mentioning Israel."

Leaders of the Brotherhood know that the Army retains ultimate power in Egypt right now, and will gradually begin the process of eroding that power. When Turkey's radical government seized control in 2002, its radical Prime Minister, Recep Erdogan, slowly and gradually began to work against the pro-Western military so that, today, he has the upper hand and can direct Turkey in the radical path he has envisioned all along. Had he not worked so patiently, the military would likely have overthrown him in a coup.

We can expect the Muslim Brotherhood to carry out the same plan in Egypt, if they are smart. Israel, on the other hand, can only prepare herself militarily for the conflict the Bible foretells. 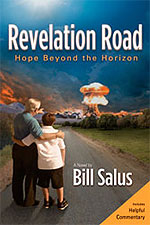 "Behold, Damascus will cease to be a city and will become a heap of ruins." (Isaiah 17:1)

"U.S. intelligence agencies are closely watching Israel’s military for signs it will conduct strikes on Syria’s stockpiles of chemical weapons, amid concerns the deadly nerve agents could fall under the control of Hezbollah or al Qaeda terrorists, U.S. officials said."

I hesitate to place a whole lot of credence in this statement, because American intelligence repeatedly sounded the same alarm about Saddam Hussein's supposed Weapons of Mass Destruction and the possibility that they might fall into the hands of terrorists. Nevertheless, since "truth is not what is, but is what people think it to be", this warning could signal the beginning of a plan to strike Damascus.

How much chemical weaponry does Syria possess? No one really knows. In fact, officials can only "suspect" that Syria does have chemical weapons in her arsenal.

"Syria’s arsenal remains vulnerable as the result of the internal conflict currently underway in Syria between government forces and opposition rebels, one official said. 'Everyone suspects Syria maintains an active chemical weapons program; and it would be dangerous not to plan accordingly', the official said."

Western extraction teams are already said to be operating in Syria.

"... other U.S. officials said special operations forces are prepared to take action inside Syria in the event the regime falls and the country spirals further into chaos. The teams would seek to secure or destroy stockpiles of chemical arms to keep them from being taken over by terrorists ... CIA operatives are working in southern Turkey to coordinate foreign assistance to Syrian rebel forces."

Will this be the trigger which shall destroy Damascus, as Isaiah 17:1 foretells? It is quite possible. This news makes the chapter of the book, "Revelation Road", shown above, entitled, "Panic in Damascus" extremely interesting and relevant!

In the meantime, Syria adds fuel to the fire by shooting down a Turkish fighter jet!

"Turkish Foreign Minister Ahmet Davutoglu phoned world powers on Saturday to brief them about the downing of one of Ankara's planes by Syria as a joint search for the airmen, who were shot down over the Mediterranean, tried to locate them ... Signals from both sides suggested neither wanted a military confrontation over Friday's incident ... Iraq, which borders both, said the incident marked a serious escalation of the Syrian conflict, demonstrating its potential to affect other countries in the region."

"Turkey has declared it will respond decisively."

How was it possible for Syria to shoot down this Turkish fighter plane?

"The plane's downing showcased Syria's Russian-supplied air defenses - one of the many reasons Western powers are loathe to intervene to halt bloodshed in the country."

Do you remember when President Bush originally told the world in October, 2001, that there were three "rogue countries" which posed a huge risk to our peace and stability? Bush listed Iraq, Iran and North Korea and immediately began to threaten them. North Korea and Iran already possessed nuclear weapons. Only Iraq did not actually possess atomic weaponry; only Iraq was invaded, because she had no Weapons of Mass Destruction, specifically, nuclear weapons.

If Syria possesses advanced weaponry which can effectively be wielded against Western powers, she might not be invaded either!

But, the fact remains that events in the Middle East continue to spiral out of control. Once the 10-Nation Reorganization Plan is completed (NEWS2363), this tinder box will explode with enough power to propel Antichrist to the world scene.

The plan of the Elite to reorganize the world into the Ten Kingdoms of Daniel 7:7-8 may yet prove to provide the spark for the all-out war between Israel and her Arab neighbors which shall produce Antichrist on the world scene and provoke the beginning of the Seven-Year Tribulation. J.D. Grush remarkably provides prophetic detail as to how Jesus Christ will personally rescue an Israel which has finally turned toward Him, "recognizing Him whom they have pierced"!

Hang on to your Bibles, folks, because events are about to transpire which shall validate prophecy to a degree unparalleled in all of world's long history!

Doubt it not! Are you ready to witness to unsaved loved ones and co-workers, using fulfilled prophecy as the tool of salvation?