The Eye of Antichrist

THE EYE OF ANTICHRIST

An article from PrisonPlanet.com that was included in the Cutting Edge “Daily News Updates” on August 7th caught my attention and prompted some research on the subject. The title was “Why Does The ?” and the subtitle says that the occult symbol “appears the world over.”

But while I knew that was true, the article at http://www.prisonplanet.com/why-does-the-illuminati-eye-infest-christian-churches.html contained the following quote about something I did not know:  “The author attributes the eye to a representation of Dajjal or “The Impostor-Christ,” an evil figure in Islamic eschatology who will supposedly return as a false prophet before Judgment Day. According to one description, ‘It is said that he will have one eye damaged and the other will be working.’” (Also the article contained a link to a You Tube video that shows several churches throughout the world where the eye is prominently displayed).

And to learn more about the subject of the “Dijjal I looked it up on Wikipedia, “the online dictionary”:

“Dajjal is a common Arabic word, used in the sense of "false prophet", but al-Masih ad-Dajjal, with the definite article, refers to "the impostor", a specific end-of times deceiver. The term al-Masīḥ ad-Dajjāl (Arabic for "the false messiah") is a literal translation of the Syriac term Mšīḥā Daggālā, which had been in the common vocabulary of the Middle East and adapted into the Arabic language 400 years prior to the Qur'an via the Peshitta (which uses that term instead of the Greek "Antichristos")

The belief is based around the events prior to the Day of Judgment around the Second Coming of The Christ, when ad-Dajjal who is blind in his right eye, shall gather an army of those he has deceived and lead them in a war against Jesus, who shall be accompanied by an army of the righteous.

He will appear somewhere between and , at which time Jesus will return and Imam Mahdi will defeat ad-Dajjal in . He will travel the whole world in forty days preaching his falsehood but will be unable to enter or .

Linguistically, the reason for his name being al-Masīḥ ad-Dajjāl is simply because masih is a title given to one who travels extensively to increase their influence in the world. Jesus is also called masih because he will roam throughout the world to preach righteousness and virtue, whereas the Dajjal would travel around the world to do just the opposite. He would gain control over the whole world, which is the specific reason he is called masih. Essentially, Jesus is the masih of virtue and righteousness; Dajjal is the masih of evil” [End of quote].

Is it not interesting that Islam also has a tradition concerning the antichrist and that he will be blind in his right eye? No doubt that bit of information was lifted from the Christian Bible because the following verse from Zechariah was written five hundred years before Christ—whereas it is said that there are no copies of the Koran in existence older than 750 A.D:

“Woe to the worthless and foolish shepherd who deserts the flock! The sword shall smite his arm and his right eye; his arm shall be utterly withered and his right eye utterly blinded” Zechariah 11:17 (Amplified Bible).

Many conservative Bible teachers hold that this quote from Zechariah refers to the antichrist—and if I may, I would like to offer some evidence that not only tends to support that premise, but also sheds some light on the true nature of the so-called “All-seeing Eye of God” that is found in those churches!

First of all, the following articles from Cutting Edge establish the fact that the symbol is derived from the Egyptian “eye of Horus” and was brought into our culture via the tenets of Freemasonry:

And when we examine the verse from Zechariah (11:17) cited above, it will be found that the “worthless and foolish shepherd” will not only lose his right eye to the sword, but will also have one of his arms rendered useless. Which arm will it be? I can not be dogmatic about it, but in my opinion it will be his right arm because of the numerous references in the Bible concerning God’s right hand and arm—powerful symbols of His sovereign majesty and power that the devil seeks to usurp. Therefore, since the symbol of the right eye is generally held to represent intelligence and the arm to be strength, for the antichrist to be deprived of them will be a powerful statement from God about Satan’s ridiculous plan to replace Him!

“And at the latter end of their kingdom, when the transgressors [the apostate Jews] have reached the fullness [of their wickedness, taxing the limits of God’s mercy], a king of fierce countenance and understanding dark trickery and craftiness shall stand up” Daniel 8:23 (Amplified Bible, emphasis mine).

I believe many commentaries have missed the mark by not recognizing that Daniel 8:23 is also a description of the antichrist and not just limited to Antiochus Epiphanes—the cruel Syrian king who oppressed after the death of Alexander the Great. Where some biblical prophecies are concerned, we must recognize that there is dual aspect to them which contains a “near fulfillment” to be followed by a “far (or future) fulfillment.” In other words what Antiochus Epiphanes did to the Jews of his day was a precursor of what will be done to them in the future on a much greater scale by the antichrist. And the “fierce countenance” of that future king may describe a face that has been terribly scarred by a blow from a sword:

“And one of his heads seemed to have a deadly wound. But his death stroke was healed; and the whole earth went after the beast in amazement and admiration” Revelation 13:3 (Amplified Bible).

Plus there is something else here that I think should be considered. If in fact the use of the right hand is going to be taken away, could this not be the occult basis for the “left hand path” of black magick and Satanism? The devil can read too and knows what the Bible says about that time in the future when his man will rule and reign over the earth for seven years! And because of such prophecies in God’s Word he has known all along the ultimate fate that awaits him—so why not try to compensate by having the principles and tenets of his false religion to be “left-handed?!”

Due to losing the sight in his right eye the antichrist will have to make do with his left eye and here is where this subject really gets interesting! After carefully examining every picture that I could locate in which the “All-seeing Eye” was clearly defined, I was amazed to find that many of them are left eyes! But how can such a determination be made, you ask? The answer is that all we have to do is look for the location of the “caruncula,” the little round fleshy bit of tissue in the middle of a slot at the side of each eye nearest the nose. (Its function is to channel tears to the “lacrimal sac” which then siphons them off to the lacrimal duct and into the nasal cavity—thereby keeping it moist). And the location of the caruncula determines whether it is a left or right eye that is being depicted. If it is on the left side of the eyeball when viewed by someone else, it is the left eye and vice versa. Also in many cases the eyelid will be slightly wider on the side opposite to the caruncula. (This is true of my own eyes). So with these facts in mind, let us consider a few pictures and see if there is any justification for such an assumption: 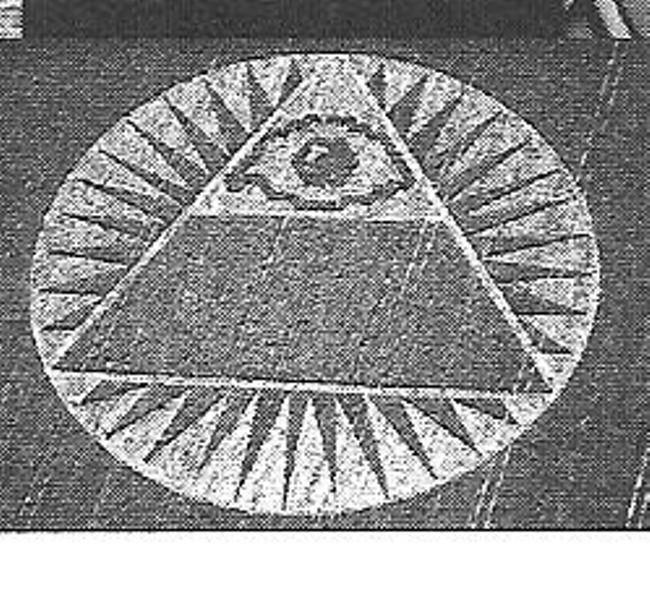 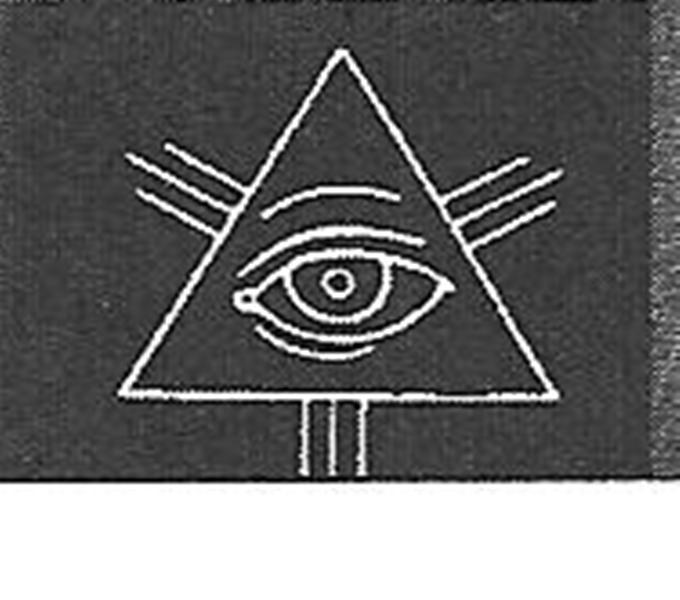 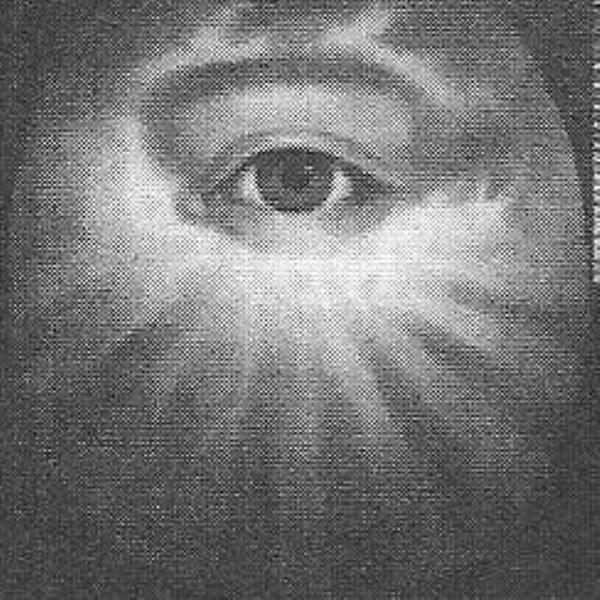 And the following is, without a doubt, the most widely known example of the “All-seeing Eye” in existence! Note that the eyelid is clearly wider on the side opposite to the caruncula. And since we know that Freemasons were responsible for having this symbol to be a part of the “Great Seal of the ” and subsequently printed on the backs of our dollar bills, the specific details should be viewed as accurate from an occult point of view. 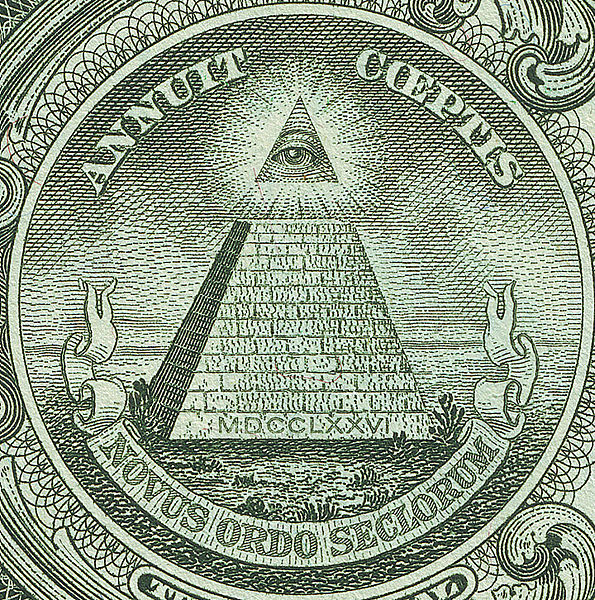 In closing I want to direct our attention back to a Cuttiing Edge article entitled WHY IS ANTICHRIST SYMBOLISM PREVALENTLY SHOWN IN "THE PASSION" at http://www.cuttingedge.org/news/n1898.cfm

In that film by Mel Gibson “the christ” is depicted as having his right eye swollen shut—after being beaten by Roman soldiers. But as the article explains, what we think we see is not always as it seems!

If you have been born again and received Jesus Christ as your personal Savior, but have been very lukewarm in your spiritual walk with Him, you need to immediately ask Him for forgiveness and for renewal. He will instantly forgive you, and fill your heart with the joy of the Holy Spirit. Then, you need to begin a daily walk of prayer and personal Bible Study.

If you have never placed your trust in Jesus Christ as your Savior, but have come to sense His reality and the approaching End of the Age, and want to receive His FREE Gift of Eternal Life, you can do so now, in the privacy of your home. Once you truly believe in Him as Lord and Savior, you are spiritually Born Again, and are as assured of Heaven as if you were already there. Then, you can rest assured that the Kingdom of Antichrist will not touch you spiritually. If you would like to become Born Again, turn to our Salvation Page now.

We hope you have been blessed by this ministry, which seeks to educate and warn people, so that they can see the coming New World Order Kingdom of Antichrist in their daily news.

Finally, we would love to hear from you. You can write us at:
Cutting Edge Ministries, C/O Pastor Ron Riffe
P.O. Box 26
Gordo, AL 35466

You can also E-Mail  Pastor Ronald Riffe  regarding questions or comments about this article.