CHRISTIAN CHURCHES ARE OPENING THE DOOR TO ANTICHRIST WITH OUTCOME BASED RELIGION !

BOOK NOW AVAILABLE ON CD, BOOK or DVD VIDEO - You can read some sample chapters below. 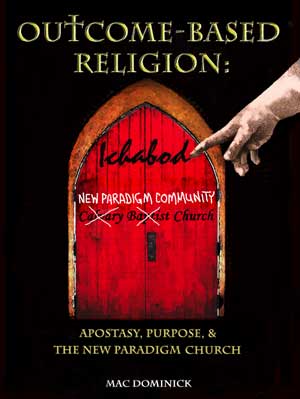 Are big changes taking place in your church? Has the expository preaching of the Word of God been replaced by lectures in “Psychology 101?” Have the messages from the pulpit been so permeated with “tolerance” that sin is no longer identifiable? Has the emphasis of reaching the lost for Christ been replaced by the mantra bringing in the unchurched? Does the pastor use so many translations of the Bible that you are no longer sure what the Bible actually teaches? Have the hymnals been trashed in favor of the overhead projector? Has the choir been supplanted by a contemporary “praise band?” Has the direction of the Holy Spirit on the service been replaced by “40 Day” campaigns? Has your church mushroomed in size with throngs of people that have no idea of what they believe? If the answer to the majority of these questions is “yes,” your church is falling victim to Outcome-Based Religion.

Outcome-Based Religion is another manifestation of the 21st Century that is all about meeting the needs of the consumer with as little inconvenience as possible. It is no secret that we have become a “Super Walmart Society” that flocks to the mega-store, the mega-mall and yes, even the mega-church. Church growth has become the order of the day within broad-based protestantism, evangelicalism, and even fundamentalism with the catch-phrases like “seeker-sensitive,” “seeker-friendly,” and “purpose-driven” becoming household terms among conservative religious individuals.

Unfortunately, the developers of the methods and practices currently implemented to build this New Paradigm Church have not considered the Word of God as a valid source document in the developmental process. In lieu of an operational system built upon God’s absolute truth, they have chosen a strange mixture of behavioral science, marketing techniques, “Management by Objective”, General Systems Theory, and cultural relativism bathed in religious terminology to concoct a program for optimal church growth.

This book gives the reader the vital information needed to identify the warning signs needed to stand in defense of the Faith in the face of this gathering storm of apostasy. It should be required reading for all pastors and laypeople who desire to understand the deceptive nature of this apostasy, and particularly those who are battling this movement within their own church. Finally, this book exposes the very real danger that if this movement continues unchecked, there may well arise a new generation that “knows not the Lord.”

This CD is in PDF format, and fully searchable on your computer.


THE RULES OF THE NEW PARADIGM CHURCH GAME

The ominous threat to true Bible-based Christianity is very real, and those in the Church Growth Movement are rapidly destroying the "Faith" believers have been charged by the Word of God to defend. In this chapter, the plot really begins to thicken as more rules of the New Paradigm Church Game are analyzed in the light of the teachings of the Word of God. The idea expressed by Rule 4 that the growth of a ministry is synonomous with the blessings of God is absolutely absurd, but Outcome-based Religion insists this is indeed the case. The charge of Rule 5 that one should never communicate the Word of God in an "outdated style" is also blatantly ridiculous. The aspects of these modern ministry ideas and processes include discussions of "The Kingdom of God", "Christian Psychology", English translations of the Bible, the "Hollywood standard" as to what is boring or entertaining, and other subjects designed to make one take a step back and think about so many of the issues in the church that Christians tend to accept at face value .

THE RULES OF THE NEW PARADIGM CHURCH GAME

The 2 final rules of the New Paradigm Church Game complete instructions for the process of church transitioning by dealing with the most emotional issues in the entire game plan: 1) The style of music for the New Paradigm Church and 2) How to deal with opposition to the transition. The biblical position and the New Paradigm position are once again in direct conflict on these issues, and the unless the process is based on the Word of God, the outcome of exponential church growth may well be achieved---but at what cost?

As society embraces postmodern philosophies, the concept of absolute truth becomes more diminished. Minds are changing as the times change. This is called a “Paradigm Shift”. In opposition to such a change of mind, the true Church must stand against changes that attack the Word of God as absolute truth. However, the New Paradigm Church seeks to attract those of a postmodern mindset by embracing the postmodern culture. As this manuscript digs deeper into the origins of the methodology used in the Purpose-driven, Seeker Sensitive Church Growth Movement, the discoveries become not only more astounding, but absolutely appalling. This chapter exposes the origin of the methodology, the source of the financing, and the tragic impact of the New Paradigm Outcome-based Religion.