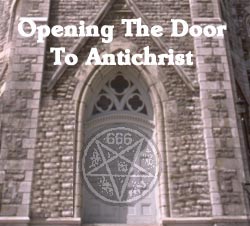 If each of us could travel back in time to the late 1960s, we would find a time of great upheaval and turmoil among mainline Protestant denominations. The Ecumenical Movement was in full swing, and the Church of Rome had visions of bringing the "wandering sheep" back into the fold of the Mother Church. Concurrently, the Six Day War featured the Israeli recapture and occupation of Jerusalem for the first time since Titus destroyed the city in 70 AD. Many in Fundamentalist circles had begun to propagate the notion that the apostasy of the "End Time" which initiated its arrival in the 19th Century was approaching fruition. Some Fundamentalists went so far as to predict that the Rapture of the Church would occur before the US celebrated its Bicentennial in 1976. These factors combined to culminate in the explosive growth of Independent Baptist Churches, nondenominational Bible Churches, and other groups such as those affiliated with the American Council of Christian Churches (ACCC) led by Dr. Carl McIntire. In the minds of those on the front lines of the "War Against the Great End-Time Apostasy", God was gathering the final members of the True Church to prepare the Bride of Christ for the Marriage Supper of the Lamb. Though some realized the threat posed by groups such as the National Association of Evangelicals, none could have imagined a future deception of creeping apostasy that would corrupt the very fiber of the churches that were founded or grew from the apostasy of the 1960s.

For those of us who lived through these experiences, it is very difficult to grasp the fact that these events transpired more than 30 years ago. The Independent Baptist Movement began to falter as early as the mid 1970s, and the decade witnessed the rise of the Assemblies of God on the surging second wave of the Charismatic Movement. The local church was gradually being transformed from a place of hearing God's man expound God's Word to God's people, to a venue of religious entertainment. The situation has now deteriorated to the point that the church now must be professionally marketed to reach out into the world for more and more growth. Church growth has become the order of the day, and programs and schemes must be put in place to meet the established goals for growth. This is the basis for OUTCOME-BASED RELIGION.

Many who read this are familiar with Outcome-based Education:

"Outcome-based Education is a philosophy that promulgates the end
justifies the means. Content is not specifically defined but chosen on
teacher perceptions. Education under this philosophy is a continuous,
life-long experience, not a preparation for life. It is a process for
government telling our children how to live, what to say, what to think,
what to know, and what not to know." (1)

Outcome-based religion is based on essentially the same principles. It also promulgates the philosophy that the end justifies the means. "The end" for the most part is church growth, and the standards of the Scripture are subordinated or ignored when perceived as a deterrent to such growth. The methods for church growth are also not specifically defined and hinge primarily on the marketing demographics of a particular community. Using a specific "black and white" guideline such as Scripture is a hindrance to these marketing efforts, and therefore the perceptions of the pastor and the consulting agency must be utilized to achieve the proper outcome. Dogmatic teaching of doctrine and theology could also be a hindrance to church growth simply because "doctrine divides". Therefore, the approach should be more of a practical guide of addressing everyday issues such as personal finance, relationships, parenting, and other social needs of those who respond to outreach programs. All programs, music, and drama productions should be choreographed with the notion of entertaining with a positive religious message so as to entice more people to church services while alienating none. Under these auspices, the church has evolved from a fortress where those of like faith were convicted of sin, reproved, nurtured, edified, instructed, and sent out into the world to reach the lost-- to an open stage for all comers to "experience God". To insure this is a positive experience for all, negative exposes of any group or individual perceived as nominally "Christian" cannot be tolerated; and an attitude of "religious-correctness" must prevail. The church also must be staffed with "Christian Counselors" schooled in "Christian Psychology" to meet the needs of people who have become frustrated in searching for answers to today's "complex problems" within the pages of that ancient, simplistic document we call the Word of God. Basically, everyone involved in the ministry must retain sight of the OUTCOME-EVERYTHING ELSE IS SUBORDINATE TO THE OUTCOME.