Title:  IS THE UNITED NATIONS ABOUT TO TAKE STEP 3 IN THE NEW JERUSALEM COVENANT PROJECT PLAN CONCERNING JERUSALEM?

Subtitle: Step #3 of this plan envisions the creation of an international sector within Jerusalem  in which all adherents of Christianity, Judaism, and Muslim can worship at a combination worship center in peace.  Are the United Nations meetings beginning Monday, August 20, 2001, going to result in this international sector being created?  We shall just have to wait to see.

Step #4 is the Pope declaring all religions of the world to be One. We seem to be getting close!

"The United Nations Security Council has decided to hold an open debate on the continuing violence between Israel and the Palestinians. The meeting, which was requested by the 57-nation Organisation of the Islamic Conference, will be held on Monday. Islamic countries and Palestinian representatives are pressing the UN to back the deployment of international monitors to help stem the violence."

This concept that international observers can do anything to stem Arab violence is nonsense.  These observers will do nothing more than observe the Palestinian attacks, and then try to prevent Israeli response.  Since Israel knows this to be fact, they have most vociferously refused to allow observers from the international community on their soil.

The Palestinians, meanwhile, are said to want international observers in order to dissuade Israel from attacking, a confirmation of the view above.  In line with these desires, the Palestinians are officially pushing the United Nations to take the following steps, presumably with or without Israel's blessing.

Let us now return back to our feature article:

"Nasser al-Kidwa, the chief Palestinian UN delegate, has released a draft resolution which the Palestinians hope the Security Council will adopt on Monday. The draft calls for:

"The Palestinians want monitors to oversee the implementation of the Mitchell report's proposals to try to end the violence. This report, which was compiled by former US Senator George Mitchell, proposes a cooling off period between the Israelis and Palestinians, followed eventually by the resumption of peace talks."

It is ironic that the Palestinians would keep invoking the Mitchell Act, for they have been the ones most active in perpetuating the violence that has kept this plan and the Tenet Plan, from ever being implemented.  As Palestinian leaders speak of the Mitchell and the Tenet Plans, they speak as though they were fully in compliance while the Israelis were not.  The reality is 180 degrees in the other direction; the Palestinians have resolutely kept up the attack and the murderous suicide attacks at the very time these two plans were calling for a period of peace and cessation of such attacks.  Truly, the Palestinians have been guilty in spades for committing the abomination of which God warns:

"Woe unto them that call evil good, and good evil; that put darkness for light, and light for darkness; that put bitter for sweet, and sweet for bitter!" [Isaiah 5:20]

"... there is a feeling among many delegates that the Security Council should say something about the escalating violence between Israelis and Palestinians ..."  [Ibid.]

Step 2 -- Threat of war must be maintained until all the desired changes are in place.

Step 3 --Once these conferences are held simultaneously, the next desired change will be to build a combination church/mosque/temple building in Jerusalem. --- Bill further stated that "any purely political settlement in the Middle East would not, by itself, bring peace. In other words, a purely political settlement would leave the religious nature of the problem unsolved."

"Any permanent solution to the Middle East conflict would also have to see the religious portion of the problem solved. Once this religious problem is solved, then the power and influence of the Orthodox Jews in Israel would permanently decline."

Step 4 -- Pope visits combined Jewish/Christian/Muslim sector in Jerusalem to declare all religions are now one. This action will finally break the Middle East logjam. Note that this action will create the One World Religion called for in Revelation 13:11-18.  The Second Beast of Revelation, with "two horns like a lamb" [Rev 13:11] will have arrived, and the world will consider him to be Christian, just as this prophecy states.  But, we know this Beast will have the heart of a dragon -- Satan [Rev 13:11].

Step 5 -- New World Order can finally be established! Antichrist can finally arrive The Christ comes forward on to the world scene.  Revelation 6:1-2 will have arrived.

Thus, we consider it highly important that, maybe, just perhaps, the United Nations is poised to create Step #3, the declaration of an international sector within Jerusalem in which the adherents of Christianity, Judaism, and Muslim religions can supposedly worship together in peace and safety in this common worship building.

At this point, perhaps, some brilliant individual on the scene will get an equally brilliant idea; he will propose that, since the war in this region is based upon differing religions, why can't the United Nations declare that one section within Jerusalem be declared an international religious sector?  In this sector, the adherents of both Judaic and Muslim religions can worship together in a combination temple/mosque, thus solving the terrible religious conflict.

Other U.N. delegates will seize upon this brilliant idea, but will propose that the plan be expanded to include adherents of the Christian faith as well.  Thus, this international sector would include all three monotheistic religions of the world in the only city holy to all of three monotheistic faiths:  Jerusalem. 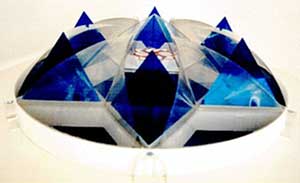 Then, at the dedication ceremony, the Pope will head up the groundbreaking ceremony.  Likely, it is here that he will declare that all religions of the world are now one, and he is the leader.  At this moment, a very critically important End of the Age prophecy will have been fulfilled.

Stage 5 is the "birth" of Antichrist, in fulfillment of Matthew 24:8, as the result of the intense "sorrows of birth pains" Jesus mentions in this verse.  Between Stages 4 and 5, the planned World War III will occur.  But, when the world is passing through Stages 3 and 4, "peace and safety" will be heralded, and the leaders of the major nations will be busily taking credit for their "brilliant" leadership that seemingly finally solved the deeply engrained religious strife in and around Jerusalem that has plagued mankind for the past 1,400 years.

Will the United Nations take the concrete steps necessary to move from the present proposal to place international observers in Israel, to the secret agenda of creating an international religious sector within Jerusalem?  Only time will tell.  However, if this is not the meeting to actually carve out this international religious sector, these meetings will have the effect of continuing the Dialectic Process of "planned conflict" producing a "planned change"; in other words, these meetings will then have at least advanced the continuation of Step 4 of the Six Step Attitudinal Change Plan [Read NEWS1055 for full details].

Bible prophecy is being fulfilled in your Daily News:

Just as God foretold nearly 2,500 years ago:  "In that day I will make Jerusalem a burdensome stone for all peoples; all who lift it or burden themselves with it shall be sorely wounded.  And all the nations of the world shall come and gather against it." [Zechariah 12:3; Parallel Bible, KJV/Amplified Bible Commentary]