Title:  ANTI-TERROR LEGISLATION -- RUSH TOWARD DICTATORSHIP
Occult Signature Visible on Votes of Both House and Senate

Subtitle: In a very thinly disguised "vote fixing" tally in both the Senate and the House, the vote tally itself equals a "666" as you calculate as does an occultist.

In Summer, 1986, I was listening to Dr. James Dobson of Focus On The Family, as he detailed his experience with Congress, having just spent a week lobbying for anti-abortion legislation.  Dr. Dobson was shocked beyond belief as he shared his new major enlightenment with his listeners.

Dr. Dobson had come to realize that House and Senate votes are regularly fixed by the Party Whips of both the Democrats and Republicans!  Here is how this "vote fixing" operated.  On any particularly important vote, the whip for each party would gather the senators and/or congressmen together to discuss how they were going to vote.  The whip would tell them the outcome desired and then would tell each member how he would vote. Members of "safe districts" were told they had to vote for the bill, and members of "contested districts" were told they could vote against the bill; however, the final tally was always the way in which the party chiefs wanted it to be.

Dr. Dobson was aghast!  He never, ever thought such "vote fixing" regularly occurred on the U.S. Capitol.

During the "debate" over this Anti-terrorism Legislation, it was obvious to the experienced observer that the vote was fixed in favor of the Administration.  Even though President Bush and Attorney General Ashcroft were demanding police-state powers -- something Conservative Americans would never have tolerated from Clinton and Reno -- Congress seemed all too eager to gravely endanger American liberties and Constitutional guarantees in the name of fighting terror.

Do not be deceived into thinking that this anti-terror legislation will end with "Middle Eastern type" terrorists.  Already, Tom Ridge has redefined what constitutes "terror" and "terrorist" [Read NEWS1553] for full details.  Soon, this legislation will be turned against Fundamental Christian dissidents and other "right wing" people.  This legislation has dictatorship written all over it, as events shall soon prove. 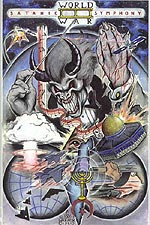 This entire effort is promoting the New World Order, the Kingdom of Antichrist.  Therefore, we should not be too surprised to learn that the "vote fixing" in this particular legislation may have been contrived as to produce an "Occult Signature" that would be obvious to fellow occultists throughout the world while hiding this fact from the "vulgar masses".

"WASHINGTON (AP) - The House approved legislation Wednesday to give police new search powers in response to last month's terrorist attacks, including the ability to secretly search homes, tap all of a person's telephone conversation and track people's use of the Internet ... Bush and Attorney General John Ashcroft have been calling for legislation to expand the FBI wiretapping and electronic surveillance authority, impose stronger penalties on those who harbor or finance terrorists and increase punishments of terrorists since the Sept. 11 attacks on the World Trade Center and Pentagon."

"The GOP-controlled House gave strong support to the bill, passing it by 357-66 despite critics' concerns about compromising civil liberties."

To make this vote tally work, 12 congressmen did not vote.

Now, let us consider the fixed vote tally of the U.S. Senate on their version of this anti-terrorism bill.

"WASHINGTON (AP) - The Senate sent President Bush legislation Thursday giving police new and expanded powers to track, punish and detain suspected terrorists. The bill, sought five days after the hijacked airliner attacks in New York and Washington, was passed by the Senate on a 98-1 vote."

To make this vote tally work, one senator did not vote.

Thus, both vote tallies calculate out to a "666".  What did Jesus counsel His followers at the End of the Age, as they were determining who is Antichrist, and who might be part of his force?  Listen:

"Here is room for discernment [a call for the wisdom of interpretation].  Let anyone who has intelligence [penetration and insight enough] calculate the number of the beast, for it is a human number, the number of a certain man; his number is 666." [Revelation 13:18; Parallel Bible, KJV/Amplified Bible Commentary].

We have just shown you how occultists calculate.  In my study of the occult, I have been amazed just how many of the people who have given their lives to gradually bring the world to a point where the New Age Christ could appear, have their lives ordered in such a way to produce a "666" calculation.  No doubt, you have read how Henry Kissinger, or Bill Clinton, or Anwar Sadat, had names that added to numeric signatures of "666".  This fact does not mean these people are THE Antichrist, but it does signify that they are part of the army of this coming Man of Lawlessness.

President Bush and Attorney General Ashcroft are leading the world into the New World Order, using the horrific September 11 attacks as their motivational tool.  In the name of fighting terror, Congress has just given the president immense police and surveillance tools that could be turned against regular Americans, and produce our first-ever dictatorship.

This is the plan.  And, those who know how Black Magick Satanists calculate can now understand for whom this legislation was passed -- for the Kingdom of the New Age Christ. As our World War III picture illustrates, Satan IS the conductor of the orchestra producing his man, Antichrist.  As the planned events unfold, and the world is overwhelmed by death, destruction, and panic, you can know for certain that Satan is playing the part of the masterful orchestra leader, skillfully melding together all disparate elements to produce his man, Antichrist, the ultimate Man of Sin and Lawlessness.

This apparently fixed vote tally passing this 'antiterrorism" bill is just one major element designed to produce conditions that will allow Antichrist to arise.  Fellow occultists all over the world saw the calculation immediately and knew the truth.

Truly, once you understand both Black Magick Satanism and Bible prophecy, you will never read the news the same way again.  Now you know the truth, for you have calculated.