Subtitle: Even as true, genuine Christianity is shrinking, and apostate, false religions are in the ascendency, the Cross of Jesus Christ will ultimately triumph! The prophetic books of Daniel and Revelation assure us of this fact. Guest columnist, Berit Kjos, explores this wonderful truth in a lively, lovely article that will strengthen your faith. 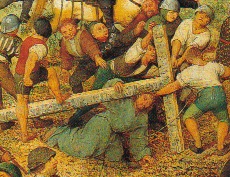 America seems torn by a mysterious love-hate relationship with the cross. The media mocks it. Liberal bureaucrats and politicians fear it. City and library administrators are known to ban it.[1] Countless progressive teachers have censored it. Yet Christians keep wearing it.

So do fashion-conscious teenagers across the country, and some stores can barely keep up with the demand. In stark contrast to an award-winning Christian police officer in Texas who was fired for wearing a tiny cross on his lapel,[2] girls from coast to coast sport decorative crosses stripped of any real Christian meaning.

"I saw it, and I thought, I've got to get this - for fashion," said Lynette Sharlo. Faith has nothing to do with her choice. "It just looks nice," she told Vicky Ortiz who wrote the article, "Teens' faith in fashion is their cross to wear."[3]

Sales across the country confirm the new rage, and the popular designs are as varied as the human imagination. The buyers range from committed Christians to the heavy metal rock crowd -- with the trendy masses in the middle.

"Some have turned to the cross after accessorizing with the symbols of other faiths, from Buddhas to Wiccan pentagrams," writes Ruth La Ferla. "In an era of rampant spiritual sampling, Christianity -- and its emblems -- have asserted themselves as the latest in hip."[4]

"It comes on strong whenever the country is in trouble,"[3] said jewelry designer Robert Lee Morris, who helped popularize Madonna's crosses back in the early 1980s. That's when the seductive singer gave new meaning to the word "virgin."

The offense of the cross

Trivializing the cross, redefining words, severing Christian symbols from their Biblical meanings.... All these tactics speed today's cultural shift. They fit the vision of a new kind of world -- one "freed" from allegiance to God's unchanging truth.

During the first half of the 20th century, two British brothers helped organize this march toward the new global ethic. Aldous Huxley showed us parts of it in his 1932 classic, Brave New World . His brother, Julian Huxley, the first head of UNESCO, brought that vision into the UN agency responsible for reshaping the world through "education" and "science." Its blueprint for global education was designed to change beliefs, values, attitudes and the way we think. Factual learning was out, experiential, feeling-based learning was in.

In 1946, Dr. Brock Chisholm, a Canadian psychiatrist and the first head of the World Health Organization (a UN agency working with UNESCO) exposed the globalist hatred for Christ and the cross in a message titled, "The Re-Establishment of Peacetime Society." His two-part strategy would first focus on "gentle" psycho-social manipulation based on behavioral science. If that didn't purge society of its need for the cross and Christ, violence and coercion would follow:

"The responsibility for necessary changes in human behavior rests clearly on the sciences working in that field. Psychologists, psychiatrists, sociologists, economists, and politicians must face this responsibility.
"...the only psychological force capable of producing these perversions [guilt, fear, isolationism...] is morality, the concept of right and wrong...

"We have been very slow to ...recognize the unnecessary and artificially imposed inferiority, guilt and fear, commonly known as sin, under which we have almost all labored and which produces so much of the social maladjustment and unhappiness in the world. For many generations we have bowed our necks to the yoke of the conviction of sin. We have swallowed all manner of poisonous certainties fed us by our parents, our Sunday and day school teachers, our politicians, our priests. ... If the race is to be freed from its crippling burden of good and evil, it must be psychiatrists who take the original responsibility. ...

"There is something to be said for taking charge of our own destiny, for gently putting aside the mistaken old ways of our elders if that is possible. It cannot be done gently, it may have to be done roughly or even violently...."[5]

Four decades later, this UN plan for "mental health" and "lifelong learning" had filtered into schools around the world. So when former President Bush introduced his massive education program in 1991, he was merely giving us the latest version of the global program. Listen to his message:

"Nations that stick to stale old notions and ideologies will falter and fail. So I'm here today to say, America will move forward.... New schools for a new world.... Re-invent--literally start from scratch and reinvent the America school.... Our challenge amounts to nothing less than a revolution in American education."[6]

Do you wonder what those "stale old notion and ideologies" were? Keep in mind, neither our Constitution nor the old Christian truths fit the new vision of a managed, adaptable world. Everything must change. "Literally start from scratch and reinvent..."

Neil Postman, the author of Amusing Ourselves to Death, understood these socialist strategies. He also saw the power of a cooperative media to fuel new cravings and dull old convictions. To illustrate today's manipulation of our minds, he drew an interesting contrast between two familiar totalitarian visions: Aldous Huxley's Brave New World and George Orwell's 1984:

The spiritual war against Christ and the cross is being waged on both fronts. The assault on religious freedom fits Orwell's vision. The flood of images and suggestions that distort traditional beliefs, twist Biblical values and trivialize Christian words, fit Huxley's vision.

While Orwellian repression intimidates many into silence and conformity, it also awakens faith and stirs resistance. But Huxley's "feelies" simply dull our thinking and distract our attention until trivia becomes the norm and Biblical conviction becomes -- under the new UN Mental Health standards -- an intolerable expression of deviance and extremism.

The victory of the cross.

A cross purged of Christian meaning offends no one. But the cross worn by a follower of Christ sends a message that many refuse to tolerate. Threatened by contrary convictions, the world demands a conformity that validates its values, not God's values. It wants approval, not truths. For "men loved darkness rather than light, because their deeds were evil." (John 3:19-20)

But those who love God -- who are "crucified with Christ,"[8] filled with His life and walking in His light -- cannot approve of that darkness. They are in the world, but not of the world. They can spread God's love, but they can't love what God forbids.[9] They are "citizens of heaven," and their eyes are fixed on eternity. So the world calls them extremists, for it doesn't understand.

The cross stirs persecution -- even in America. A rising number of brave uncompromising Christians can testify both to the "offense of the cross"[8] and to the joy of sharing Christ's suffering. Few of those heaven-minded saints demonstrate Biblical conviction more humbly and kindly than Patrol Sergeant George Daniels. Yet, in September 1998, this honored "Officer of the Year" -- a 13-year veteran of the Arlington, Texas Police Department -- was fired. While other officers could wear symbols that expressed their beliefs and values, Sergeant Daniels was denied such freedom. Afraid that his tiny cross-shaped lapel pin "might offend someone,' Police Chief David Kunkle refused to grant him permission to wear it.

George Daniels agonized over his decision. He had given his life to God, and he couldn't ignore Scriptures such as Acts 5:29. His conscience told him "to obey God rather than men," and as an American citizen, he had that right. Should he not, by faith and with his life, exercise that right?

In the end, he did. Willing to suffer for and with His Lord, he took an unpopular stand and faced the consequences. But in his heart, he agreed with the words of the apostle Paul,

"what things were gain to me, these I have counted loss for Christ?. ?Yet indeed I also count all things loss for the excellence of the knowledge of Christ Jesus my Lord, for whom I have suffered the loss of all things, and count them as rubbish, that I may gain Christ ?and be found in Him, not having my own righteousness, which is from the law, but that which is through faith in Christ, the righteousness which is from God by faith; ?that I may know Him and the power of His resurrection, and the fellowship of His sufferings, being conformed to His death...." Philippians 3:7-10

In hard times, the victory of the cross may look anything but triumphant. Jesus' disciples knew that well. Heart-broken, they had watched the torturous crucifixion. For three days,[10] they struggled with doubt and despair. They didn't yet know that the promised resurrection would indeed conquer death and grave.

We know it did! And we do well to remember that the way of the cross brings pain as well as joy. God's way up may first lead down; His call to victory might, at first, look like defeat; and His call to oneness with Christ means separation from the ways and values of the world -- a separation that has infuriated social engineers through the centuries.

But the world's hostility matters little to God's true friends. They know the riches of the eternal gifts given them through the cross -- redemption, forgiveness, freedom from bondage to sin, the indwelling Holy Spirit, a new identity and the strength needed daily to triumph in Christ.

For taking his stand with Jesus, Paul faced hatred, persecution, beatings, stoning, imprisonment, starvation and, ultimately, martyrdom. But suffering for Christ didn't quench his joy. He had counted the cost and received something infinitely greater than all the coveted thrills and treasures of the world -- fellowship with Jesus, the Lord of all, both now and forever.

See The Cross, Heaven, Why Christ Suffered and What it means to be a Christian

10. By Hebrew calculations, each day in a sequence would be counted, even though the time span might only include parts of the first and last day. Since Jesus was crucified on Friday and arose on Sunday, His death spanned three days.