Title:  BELTWAY SNIPER KILLS IN ASPEN HILL, MARYLAND, WITHIN 100 YARDS OF SHOT #1 WHICH MISSED HIS TARGET AND DID NOT KILL INITIALLY

Subtitle: This is the second time the sniper has returned to a shooting location in which he did not get a kill. He seems to be ensuring that he gets a kill at each shooting location! We have notified Law Enforcement of this pattern! 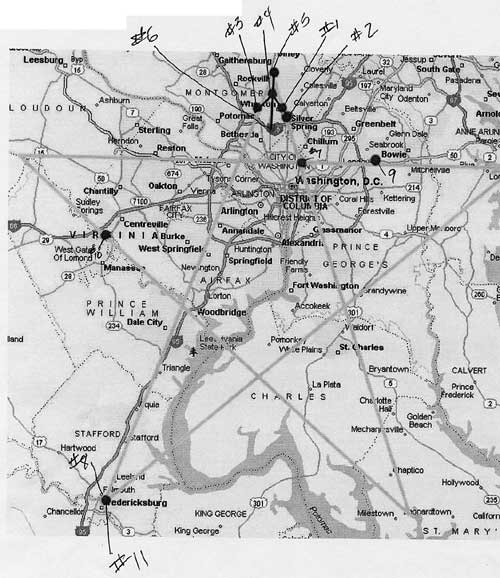 "ASPEN HILL, Md. (AP) — A bus driver was shot and killed early Tuesday in an attack that bore the hallmarks of the serial sniper who has slain nine other people in the Washington area this month. Conrad Johnson, a 35-year-old father of two, was shot as he stood at the top of the steps of the bus shortly before 6 a.m., Montgomery County police said. The location ... is less than a half-mile from where the rampage began Oct. 2."

Actually, our calculations show that this fatal shot was less than 100 yards away from the October 2 shot at the Michael's Craft Store location, a location we have labeled "Shot #1". This shot completely missed any human target, whistling just behind the head of a cashier and hitting a Prayer of Jabez book. Within a few minutes, the shooter killed a person at Shot #2, which was very close to the first shooting location.

Therefore, this sniper returned to the spot of his first shot in order to kill someone at this location. Remember our premise, that since the sniper is putting a pattern on the ground, the location is important, not the exact person being killed! Since the pattern is a pentagram with a Broken Cross located on the uppermost pyramid, we have believed from the beginning that we were dealing with a ritual pentagram; thus, it is logical that a human sacrifice needs to be recorded at each selected spot on the pentagram.

In this sniper spree before this killing, nine people were killed, three wounded, with one miss [Shot #1]. If a person that was "merely" wounded at a location, does this killing mean that the sniper must return to that location to get a kill? He certainly did that here. Is there another instance in which a location that resulted in a wounding rather than a kill, was revisited by the sniper in order to get a kill at that location?

Yes, and we did not realize what was happening at the time!

On October 4, at 2:30pm, a woman was shot and wounded in a Michael's Craft store parking lot in Fredericksburg. She was wounded but did not die; to this time, her identity was not made public. On the day after she got out of the hospital, the sniper struck in that area again, this time at 9:30am on October 11! These two locations were very close, one exit on I-95 apart.

Since there were three woundings, we now realize that the sniper has returned to two locations to record a kill. Therefore, will he return to the scene of the Bowie Middle School location where Shot #9 resulted only in a wounding of a 13-year-old boy? We do not profess to know, nor are we predicting anything, but we feel this is a valuable piece of information.

If the police watch very carefully in the general location of Shot #9, they might either prevent another killing or catch the sniper attempting another shot there, or both. We have contacted Law Enforcement with this information, for it is the very "pattern" for which homicide detectives look as they are trying to solve the crime.

Please be in much prayer at this most terrible time in our nation's history.

Truly, we are living in a time when "wicked men shall wax worse and worse".