Title:  MY MOTHER'S CHILDREN: HOW RECENT BURIAL BOX DISCOVERY WILL HAVE NO IMPACT ON CATHOLICISM'S TEACHING THAT MARY IS A PERPETUAL VIRGIN

Subtitle: Rome continues to ignore Scripture as she has always maintained that Mary's children are not really hers! You will discover how Roman Catholic doctrine on this matter almost uncannily foresaw this archaeological discovery of James' Burial Box. 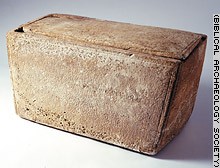 Scientists say a box with the inscription “James, the son of Joseph, brother of Jesus” has been discovered that dates back to 63 A. D. We’ve received several letters from Christians wanting to know how this discovery would affect Rome’s position that Mary had no other children and remained a “perpetual virgin”. This discovery will in no way will affect their belief. Rome refuses to believe the Scriptures which already testified that Mary had other children. In Psalm 69:8-9, in a prophecy concerning Jesus and his mother, we read:

“I am become a stranger unto my brethren, and an alien unto my mother's children. For the zeal of thine house hath eaten me up; and the reproaches of them that reproached thee are fallen upon me.”

After Jesus overturned the tables of the money changers, His disciples remembered Psalm 69 and applied it to Jesus. “And his disciples remembered that it was written, The zeal of thine house hath eaten me up.” (John 2:17) So, we know by verse 8, that Mary did indeed have other children, “my mother’s children”.

This does not include several other verses that verify Jesus had brothers and sisters.

“Is not this the carpenter's son? is not his mother called Mary? and his brethren, James, and Joses, and Simon, and Judas? And his sisters, are they not all with us? Whence then hath this man all these things?” (Matt.13:55-56)

“Then came to him his mother and his brethren, and could not come at him for the press. And it was told him by certain which said, Thy mother and thy brethren stand without, desiring to see thee.” (Luke 8:19-20)

“There came then his brethren and his mother, and, standing without, sent unto him, calling him. And the multitude sat about him, and they said unto him, Behold, thy mother and thy brethren without seek for thee. And he answered them, saying, Who is my mother, or my brethren? And he looked round about on them which sat about him, and said, Behold my mother and my brethren!” (Mr 3:31-34)

“After this he went down to Capernaum, he, and his mother, and his brethren, and his disciples: and they continued there not many days.” (Joh 2:12)

“These all continued with one accord in prayer and supplication, with the women, and Mary the mother of Jesus, and with his brethren.” (Ac 1:14)

Rome teaches that Mary remained “ever-virgin” (Catechism of the Catholic Church, #499). They teach “Mary is a virgin because her virginity is the sign of her faith ‘unadulterated by any doubt’” (ibid., #506) So, how does Rome explain away all the references to Mary’s children and Jesus having brothers and sisters? According to the Catechism of the Catholic Church, #500, we read:

“Against the doctrine the objection is sometimes raised that the Bible mentions brothers and sisters of Jesus. The Church has always understood these passages as not referring to other children of the Virgin Mary. In fact James and Joseph, ‘brothers of Jesus,’ are the sons of another Mary, a disciple of Christ, whom St. Matthew significantly calls ‘the other Mary.” They are close relations of Jesus, according to an Old Testament expression.”

I was raised Catholic and was told that the word for “cousin” and “brother” were the same and meant “kinsfolk”. That way, if I should read the Bible, the Catholic church covered herself with a lie to protect her interpretation. It wasn’t until I became a Christian that I questioned whether or not the words could be intermingled. When I looked up the word for “cousin”, I found it was “suggenes” which means “kinsfolk, or relative by blood”. But the word for “brother” was “adelphos”, which could be a “brother literally or figuratively”. I realized that Rome lied to me on the most simple matter. As an adult, I confronted our priest over the word differences, but he told me that tradition taught Joseph was married before he wed Mary and that his wife died leaving him to raise the children alone. Rome easily swept all the scriptures under her foot by her tradition, lest their doctrine of Mary’s “perpetual virginity” should be tainted. It did not matter to Rome that the scriptures said, “And knew her not till she had brought forth her firstborn son: and he called his name JESUS.” (Mt 1:25)

Had the scriptures said that Joseph “never knew her even after she brought forth her firstborn”, then Rome would have a leg to stand on. I’m sure Rome hates that little word “till”, for it does indeed expose their lie.

What is the reason behind this lie? Why does Rome insist that “Mary” remain a virgin for all eternity? Actually, it is very simple. Rome considers sex a sin, even within marriage. This teaching is the result of one man, namely Augustine, Rome’s greatest “church father”. His experiences with sex had been restricted to illicit loves from which he gained a sense of guilt and misery. His mistress of 11 years had produced only one child, Adeodatus, who died at a very young age. He felt all sex, even in marriage was evil. According to Peter De Rosa, in "Vicars of Christ: the Dark Side of the Papacy":

“Even in marriage, it is vitiated by lust. That is the chief and inescapable penalty of Adam’s fault. Lust can be justified only by the desire to procreate. Without that desire, the venial sin of lust within marriage is transformed into a mortal sin against marriage itself. The couple become ’whores’; their marriage systematic adultery. In sermon after sermon he [Augustine] repeats: ‘Husbands, love your wives but love them chastely. Insist on the work of the flesh only in such measure as is necessary for the procreation of children. Since you cannot beget children in any other way, you must descend to it against your will, for it is the punishment of Adam...A man should yearn for that embrace in which there can be no more corruption If only a couple could have children without the sordidness of sex, say, by praying on their knees together. According to Augustine, a man in his wife’s arms should concentrate icily upon the child and look forward to heaven when he can embrace her like a statue.” (318-319)

This explains why Augustine praised virginity, and why Rome, the follower of men instead of God, fell into the same trap. Had Augustine understood God’s word, he would have known the marriage bed was undefiled.

What happens when a woman cannot conceive? What would justify a man having sex with his wife? Augustine believed “Abstaining from all intercourse is certainly better than marital intercourse itself which takes place for the sake of having children” (ibid., 321). He plainly taught that sex in marriage is only for people who could not control themselves. He often used the Virgin Mary as the perfect model for all. Peter De Rosa explains:

“Mary was wholly continent, a virgin. But she also combined impossibles’: virginity and motherhood. This was perfection: motherhood without sex, virginity with the blessing of a child. It is almost as if Augustine wished God had made virginal childbearing the norm. In fact, the only way he can absolve God from the guilt of instituting marriage is by saying the inevitable lust of sex is Adam’s fault, not God’s” (321).

In Lecky’s "History of European Morals", he was able to find only two or three find descriptions of marriage in a mass of patristic writings. He said, “It would be difficult to conceive anything more coarse and repulsive than the manner in which they regarded it.” Sex was seen as unbridled lust:

“Having intercourse when the wife is pregnant was held universally to be sinful; it was wasting life-giving seed on a field already sown. Even animals do not do such a ‘filthy thing’. There was not a single mention in patristic times of the tender love married people have for one another, no sign that the Fathers realized the act of sex was an act of love.” ( "Vicars of Christ: the Dark Side of the Papacy", 323)

Once one understand the dark nature of Roman Catholicism and their view of marriage, love and family, it’s easy to understand why their Mother Goddess must remain a virgin in order to be venerated and lifted up above all men. Few Catholics really know what Rome teaches, which means that this newest archeological discovery could be an opportunity to share the true gospel and show the Catholics that Mary did have other children. They just may be curious enough to search the matter out. Let’s keep praying for their deliverance.

By Rebecca A. Sexton - Former Catholics For Christ

Rome's continued denial of Scriptural Truth continues to amaze me. The only development more amazing is the way in which Apostate, False Liberal "Christian" leaders continue to cozy up to Rome in an Ecumenical fashion leading directly to the One-World Religion of Antichrist. The End of the Age truly beckons.