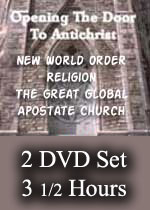 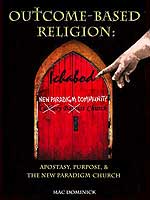 From Truth to a New Spirituality

Background information: A New Mask for an Ancient Secret, The Emerging One Church of the New World

"The hope of the New Age faith, or New Spirituality, is that when this One Humanity has achieved its 'divine potential' and all separation has been purged from the world, then world problems such as 'tribalism' and poverty and hatred and violence will be left behind. The world will then be transformed by this New Humanity into a divine new world of peace, love, good will, and sharing where everyone can be free to worship his own inner (immanent) 'God' of his own understanding in his own way.

"The call for this New Age 'kingdom of God' is now being so widely heeded, even in today’s Christianity, that the building of humanity’s Ark of Oneness is suddenly nearing completion." Tamara Hartzell

"The coming of the lawless one is according to the working of Satan, with all power, signs, and lying wonders, and with all unrighteous deception among those who perish, because they did not receive the love of the truth, that they might be saved." 2 Thessalonians 2:9-12

Note: The occult quotes below, listed under Transition and New Spirituality, were dictated by seducing spirits channeled by influential occultists such as Alice Bailey (spirit guide Djwhal Khul) and Neale Donald Walsch (a counterfeit "God"). These revealing messages were compiled by our friend and fellow-researcher Tamara Hartzell and explained in her insightful report: "Are you 'Being led away with Error of the Wicked' to the New Age Ark of Oneness?" The endnotes are numbered as they appear in her report.

To glimpse the vast network of world leaders, occult authors, and deceiving spirits behind this New Spirituality, you may want to preview an unfinished article available at http://www.crossroad.to/articles2/08/new-spirituality.htm

"For the time will come when they will not endure sound doctrine, but according to their own desires, because they have itching ears, they will heap up for themselves teachers; and they will turn their ears away from the truth, and be turned aside to fables. But you be watchful in all things..."  2 Timothy 4:2-5

58. Alice Bailey, The Consciousness of the Atom, The Goal of Evolution, (Caux, Switzerland: Netnews Association and/or its suppliers, 2002), http://www.netnews.org.

13. Alice Bailey & Djwhal Khul, The Reappearance of the Christ, Chapter IV - The Work of the Christ Today and in the Future, http://www.netnews.org.

2. Alice Bailey & Djwhal Khul, The Destiny of the Nations, The Nations and the Rays, (Caux, Switzerland: Netnews Association and/or its suppliers, 2002), http://www.netnews.org.

Note 1: A Course in Miracles, What Is Sin? at http://acim.home.att.net/workbook250a.html (Unlike the quotes above, this came from our article, Deceived by a counterfeit "Jesus")

un  at  and Who defines the Kingdom of God? at www.crossroad.to/articles2/006/kingdom-world.htm

If you have never accepted Jesus Christ as Savior, but have come to realize His reality and the approaching End of the Age, and want to accept His FREE Gift of Eternal Life, you can also do so now, in the privacy of your home. Once you accept Him as Savior, you are spiritually Born Again, and are as assured of Heaven as if you were already there. Then, you can rest assured that the Kingdom of Antichrist will not touch you spiritually.
If you would like to become Born Again, turn to our Salvation Page now.