Subtitle:  In NEWS1350, we demonstrate that the disasters of school shootings, Waco, Oklahoma City, aircraft disasters, and weather disasters that have occurred within the time of the Clinton Administration, have occurred along the lines of a huge hexagram with Hope, Arkansas, at the key point.  Incredibly, this latest school shooting in Lake Worth, Florida, falls along this same line.

"LAKE WORTH, Fla. . . Nathaniel Brazill was a seventh-grader on the honor roll, a model student with perfect attendance. The 13-year-old flute player also had been picked to be a student mediator at Lake Worth Community Middle School next fall. School officials, friends and family today were struggling to understand how the skinny kid who loved to joke around could be responsible for fatally shooting Barry Grunow, a beloved English teacher, on the last day of the school year. 'If you asked me to pick one kid out of a 1,000 to do something like this, he wouldn't be the one,' said Palm Beach County Schools Superintendent H. Benjamin Marlin.'Brazill earned A's and B's', according to Nat Harrington, a spokesman for the school board. 'He had no problems of any kind, prior to this.' "

Once again, we Americans are treated to a horrific gun shooting crime in one of our Public Schools.  However, this one came at a particularly time; the Million Mom March in Washington, D.C. last week failed by 90 percent in its attendance goal, and the rhetoric failed to ignite a wave of public sentiment against the ownership of guns.

Therefore, it is well within reason to expect another shooting to aid the Government's efforts to seize all guns from the American public, all 100 million of them.  Even as all forces are gathering around the world to create the One World Government so eagerly sought by occult forces for the past three hundred years, it may well be said that the 100 million guns in the hands of tens of millions of Americans may well be the one huge obstacle standing in the way.

We should not be too surprised to learn that our nation's top leadership is employing witchcraft to achieve this cherished goal.  As we have stated in our "Clinton's Fatal Leadership" series, both Bill and Hillary are powerful practicing witches employing Black Magick Witchcraft.  We believe they have been utilizing such witchcraft ever since they gained the White House in 1993; Waco was the first planned incident in this utilization of witchcraft to gain absolute control over this country.

If you have not read our articles on this most important subject, we urge you to stop right now to read the following Cutting Edge articles that will give you the background you need to understand from whence we are coming on this issue:

1.  NEWS1344 -- "School Shootings Have A Pattern That Implicate The President and His Government -- Gun Control Is The Objective; Black Magick Witchcraft Is The Power" Part 1 of 3

3.  NEWS1347 -- Both Waco and Oklahoma City Are No Further Off The Intersecting Lines of the Goats-Head Horn Than Columbine High School -- Part 3 of 3.

4.  NEWS1350 -- School Shooting Map May Be A Hexagram Extending to Canada To The Tip of South America!  The Central Point Is Hope, Arkansas.

We encourage you to take the time to read these foundational articles before you continue with this one.  Only then will you have the basis of understanding from whence we are coming here. 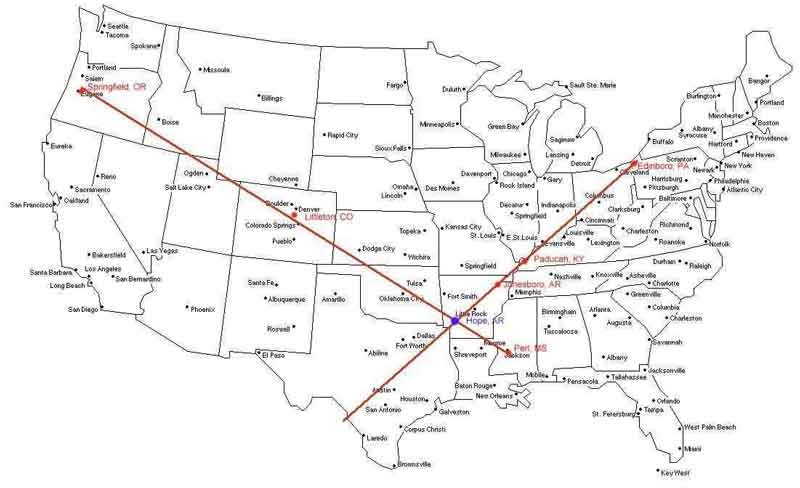 This is the original map that began our first line of inquiry into the apparently planned nature of these school shootings.  We received this map from a former Black Magick Satanist, now a born again Christian.  When he forwarded this incredible map to me, he said he had gotten it from a web site frequented by Satanists, including himself when he was active in the coven.  Needless to say, this web site is created and maintained by a Satanist.

This site was boasting that there was a plan behind all these school shootings, that this plan involved the use of powerful witchcraft, and that this map was the key to understanding the pattern.  When a Satanist places a powerful witchcraft symbol on the ground, or on a map, they believe it comes alive with incredible Satanic power, pulsating with energy 24 hours per day, 7 days per week.  This is exactly the concept behind the street design of Washington, D.C., created in 1789 by an Illuminized Freemason [Read NEWS1140, "Masonic Symbols of Power In Their Seat of Power, Washington, D.C."]

At first, we thought these two lines intersecting at Hope, Arkansas, was a Pentagram.  However, we quickly discovered the angles were wrong for a Pentagram, but just right for a Hexagram.  [Read NEWS1350 if you have not done so already]  Of course, the Hexagram is THE most powerful evil symbol of witchcraft, and is the key word for the phrase "I am going to put a Hex on you".  Truly, Clinton has planned a Hex on America with this symbol, especially for the purpose of gaining Gun Control and Confiscation, long an Iluminist goal.

This original map contained 6 shootings, three along each intersecting line.  The Shooting in Fort Gibson, Oklahoma, also fell within the width of the line, and now this Lake Worth, Florida, shooting falls along the same line, from Northwest to Southeast.  Now, we have 8 school shootings that fall either on or along this Satanic line.  What are the odds against these 8 events happening accidentally?

A mathemetician calculated the odds for us.  He said, "... there are 360 degrees in a circle and since there are four lines that emanate from Hope, Arkansas, you would divide that by 4 to say that the odds that one event would fall on any of these four lines would be equal to 1 in 90.  Two events would be 1 in 8,100; three events would be 1 in 729,000 against; the odds that eight events would fall on any one of four lines emanating from Hope, Arkansas are actually 1 in 4,304,672,100,000 against it being accidental.  That is over 1 in 4.3 trillion against these events happening accidentally."

Thus, the chances against these 8 events occurring accidentally along these intersecting lines is a staggering 4.3 trillion to 1 against!  I think we have established, beyond reasonable doubt, that these events are planned events. Since these lines center -- intersect -- in Hope, Arkansas, we can only conclude they are planned and carried out by the Clinton Administration.  Finally, the only possible explanation for these school shootings to be carried out along these two upper lines of a Satanic Hexagram is to so anger the American people against guns they will rise up as one to demand all citizens give them up.

The question of the hour is this: will America ever escape Bill Clinton, or are we about to head into those planned crises that will produce Antichrist -- World War III in the Middle East, War in Korea, China invading Taiwan, domestic terror, suspension of our government -- that will allow Clinton to remain in power.

Truly the End of the Age is upon us.  Are you spiritually ready? Is your family? Are you adequately protecting your loved ones? This is the reason for this ministry, to enable you to first understand the peril facing you, and then help you develop strategies to warn and protect your loved ones. Once you have been thoroughly trained, you can also use your knowledge as a means to open the door of discussion with an unsaved person. I have been able to use it many times, and have seen people come to Jesus Christ as a result. These perilous times are also a time when we can reach many souls for Jesus Christ, making an eternal difference.