Title:  Since The 'Star of David' Is A Satanic Hexagram, What Is The Biblical Symbol For Israel?

Subtitle: We received some pointed criticism for our Newsletter revelation that the 'Star of David' is not God's symbol for Israel, but is Satan's symbol. What, then, is the Biblical symbol for the nation, Israel? You might be very surprised.

One of the most sensitive issues with which secular Israelis and many Messianic Christians struggle is the hexagram on the flag of the modern state of Israel. Satanists recognize this symbol as one of their favorites, and most powerful, i.e., the hexagram. However, secular Jews and many Messianic Christians insist that this symbol is not a hexagram, but is the "Star of David". Such apologists also insist that the symbol has to be all right, because King Solomon was the one who selected the symbol.

We write this article in order to set the record straight -- hopefully for the last time.

The House of Rothschild was the moving force, both politically and financially, behind the original Zionist movement of Jews back to the land of Israel. The Satanic Illuminist, Rothschild, began the Zionist Movement in 1896, funded the agitation through 1948 to get Israel re-established back in the land, and has owned the leadership of Israel up to the current day. To see the reality of this fact, you only need to examine Israel's flag, the most Satanic of all symbols, the hexagram. We have posted several articles on this subject, which, if you have not read them before, you need to stop and read them as background for the information contained in this article. These are the previous Cutting Edge articles:

In the News Alert for July 24, 2007, I reported that the Hexagram was not the symbol for Modern Israel. Pointed criticism immediately flew my way from a very sincere and very distressed Messianic Christian. I write this article to clear up one of the greatest misconceptions in this modern era.

The hexagram is Satan's symbol for Israel, while the menorah is God's symbol. 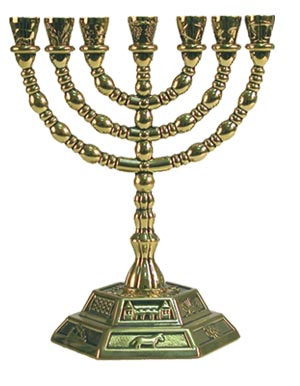 Listen to Dr. O.J. Graham, above, as he begins our discussion.

"The quest began at York University, Ontario, Canada, when an Orthodox Jewish friend of mine was investigating Messianic Judaism ...

" 'Not my brand of Judaism. We use the Menorah.' (Orthodox Jew replied)"

Can this be true? Is it possible that God's mandated Menorah is the real symbol for Ancient Israel, and not the "Star of David"?

"The menorah (Hebrew: ?????), is a seven branched candelabrum lit by olive oil in the Tabernacle and the Temple in Jerusalem. The menorah is one of the oldest symbols of the Jewish people. It is said to symbolize the burning bush as seen by Moses on Mount Sinai (Exodus 25). "

Not satisfied? Listen to other sources:

"The Menorah has served as a uniquely Jewish symbol from antiquity to contemporary times. The Menorah can be found on ancient coins, gravestones, synagogue decorations. Today the Menorah serves as the seal and emblem of the Jewish State of Israel." ("About Judaism", http://judaism.about.com/cs/hanukkah/f/Menorah.htm )

Did you catch that pertinent quote? The Menorah was the symbol of Judaism "from antiquity to contemporary times".

"The menorah which appears on the emblem of the State of Israel was copied from the relief carved into the Arch of Titus in Rome, where it had once stood for the suppression of the Jewish Revolt, the conquest of Jerusalem, and the destruction of the Temple. In this context, the symbol of the menorah expresses the thesis and antithesis of Jewish history." ("The Seventh-Branched Menorah: An Evolving Jewish Symbol", by Ida Huberman)

"The menorah was the most important symbol of the Temple after the Ark of the Covenant. The image of the biblical menorah is the symbol of the modern state of Israel." ("Israel seeks return of Temple artifacts", World Net Daily, January 16, 2004)

"One of the oldest symbols of the Jewish faith is the menorah, a seven-branched candelabrum used in the Temple." ("Jewish Symbols: The Menorah", Doing Judaism - http://www.doingzionism.org.il/resources/view.asp?id=48)

"The menorah is the official symbol of the Jewish nation." ("The history of the menorah", Jewish-Art.org, http://www.jewish-art.org/menorah.html )

"The menorah is a seven-branched candelabra often seen on Jewish tombstones, especially those of women. The menorah is one of the oldest symbols of Judaism." ("Cemeteries and Cemetery Symbols", http://cemeteries.wordpress.com/2006/09/18/menorah/ )

"The seven-branched menorah's presence in the Holy Temple had been commanded in the Torah (the Hebrew Bible or Old Testament) ... Over the years, the menorah has evolved to represent more than a candelabra. It has become a symbol of Judaism, and is even used on some Israeli coins." ("Hanukkah: The Dedication of the Temple, the Meaning of the Menorah, the Whirling Wonder of the Dreidel", Galleria Judaica: The Jewish Wedding Experts" - http://www.galleryjudaica.com/articles/hanukah.html )

Let us now return to a discussion as to how the Hexagram is really a Satanic symbol which apostate Jews have used since the time of Ancient Babylon and Egypt.

Is you just glance at the Israeli flag, you will easily see that the dominant symbol is a Satanic hexagram! Yes, it is called a "Star of David", because King Solomon adopted it as a main symbol when he was building pagan temples for some of his pagan wives. Former Satanists adamantly state that King Solomon actually became one of the most powerful Shamans in world history, having slipped deeply into the practice of the occult.

Let us now examine the writings of Dr. Graham to see how correct former Satanists have been on this subject.

"The first mention of this symbol was in 922 BC, when Solomon got involved in witchcraft and magic ... this book traces the worship of Ashtroreth (Astartee --meaning star) and Chiun and Remphan (meaning star) from the Egyptians before Solomon's time. Then afterward, in Arab magic and witchcraft, through the Middle Ages, it was used by the Druids, during the highest Sabbath of the witches, called Halloween. The family of the Rothschild, Zionist and Hitler have all used the symbol, as has the Knesset. Finally, it is featured on the flag of Israel." (Dr. O.J. Graham, "The Six-Pointed Star", p. 3, Introduction)

Please ask yourself: where in the Bible the hexagram is used as a symbol of Israel? I really want to see that Scripture and verse reference. If you can find it, please let me know. My research tells me that the hexagram is one of the Satanic symbols with which apostate Jewry fell in love time and time again in Israel's long ancient history.

Then, when the time had arrived for God to bring Satan back to her land, in fulfillment of so many Old Testament prophecies, He allowed Satan to actually bring Israel back, in fulfillment of the prophecy of Ezekiel 37:8d, where God prophesied that He would bring Israel back to life, and stand her on her feet, but initially put "no spirit" in her; since Bible scholars have always recognized that this is a reference to the Holy Spirit, and since the Holy Spirit always testifies of Jesus (John 15:26), this prophecy must mean that Israel will return initially to her land, without a belief in Jesus Christ as Messiah.

And, of course, this is exactly what occurred. The most important Illuminati family ever, the Rothschilds, were instrumental in raising up the Zionist Movement in 1896, in funding its activities, and then forcing the Illuminati leaders of Israel in 1948 to adopt the hexagram as their national symbol.

Well-meaning Christians today are allowing themselves to be duped into supporting Israel today, for that leadership is deeply Satanic and is actively supporting the coming Masonic Messiah, and the rebuilding of the Temple for him. this current Israeli leadership is planning to build the next Temple - which too Christians have supported - which is going to be the Temple of Antichrist.

Israel is proceeding to complete fulfillment of prophecy, which will culminate in the Masonic Christ (Antichrist) coming to the world scene, deceiving Israel and then being slaughtered in fulfillment of Zechariah 13:8-9, where God will allow Antichrist to kill 66% of all Jews. This is the point where all these Illuminati Jews will meet their Maker.

Then, Israel will be composed only of the Christian remnant whom God has preserved. When Jesus returns, He will return to a Christian Israel. THAT is the Israel upon which I have my eye and my affections. THAT is the Israel for which Evangelical Christians ought to be praying. Our Petra DVD tells the story of how God is preparing Petra to be His hiding place for the one-third remnant which God is going to divinely protect.

Events in Israel are setting the stage for the last fulfillment in world history.