Title:  President Bush May Yet Be Tried As An International Genocide War Criminal For Using Depleted Uranium Munitions In Iraq and Afghanistan

Subtitle: In February, 2004, Cutting Edge first raised the warning that the Illuminati seemed to be deliberately discrediting President Bush. That campaign seems now to be moving into high gear as a United Nations committee actually voted overwhelmingly to protest the use of D.U. weaponry anywhere in the world.

Will 2008 be the year when people finally learn that over one billion people are likely to die from D.U. poisoning? 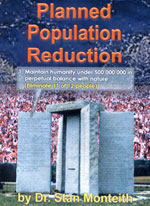 Presidents George H.W. Bush, William Clinton, and George W. Bush are guilty of the war crime of Genocide for unleashing Depleted Uranium warfare upon helpless and innocent people! Please take the time to read of the facts about D.U. in our Depleted Uranium Section, as you will discover that almost 900 million people right now, as of this moment, are daily breathing in D.U. contaminated dust throughout the Middle East.

In NEWS2063, "Blinding Sandstorms: How Depleted Uranium Kills Entire Populations", you will see how civilians many thousands of miles away from the battlefields of Iraq and Afghanistan can be dying from uranium poisoning. Sandstorms drive the contaminated dust! Thus, in the next 15-20 years, the populations of these unfortunate people will be dying in horrendous numbers. The most hard-hit states -- Afghanistan and Iraq -- will be virtually unlivable. Depleted Uranium is a population-wide killer and it will steadily work its deadly medicine.

Up until now, Illuminati governments throughout the world have successfully prevented the Mass Media from exposing the horror stories of Depleted Uranium Poisoning from being publicized. Only the New York Post ran any kind of a story, a front-page news story which was never repeated (NEWS1907, "President Bush's Nuclear Arms Against Iraq and Afghanistan Confirmed").

You see, since Presidents Bush (Sr.), Clinton, and Bush (Jr.) all ordered Depleted Uranium wars, both Democrat and Republican Parties have a vested interest in keeping public anger and panic from rising to the levels which would occur if every family of every soldier which has served in Iraq and Afghanistan understood that their loved one had a 90% chance of dying over the next 15 years.

Furthermore, since both NATO and Russian armed forces are armed to the teeth with Depleted Uranium munitions, those authorities have a strong vested interest in also making sure that this unparalleled disaster is kept very, very quiet.

Therefore, I find it amazing that the little nations of the world were able to force passage of a United Nations bill which condemns D.U. warfare and which demands that all the armed forces in the world delete this weaponry from their arsenal. Let us now review this story.

"The resolution entitled 'Effects of the use of armaments and ammunitions containing depleted uranium' was passed by 122 votes to six at the UN First Committee in New York; with 35 abstentions. The resolution urges UN member states to re-examine the health hazards posed by the use of uranium weapons. The resolution was drafted by the Movement of Non Aligned States and submitted by Indonesia. It requests that states and international bodies submit a report on DU to the UN General Assembly during next year's session; depleted uranium weapons will also feature on the Assembly's agenda. A second vote confirming the resolution will take place early next year."

" 'This is a good result for our campaign', said ICBUW Coordinator Doug Weir. 'States around the world are no longer content to accept the claims by the users of these weapon systems that exposure to uranium dust is not linked to ill health. The last few years have seen great advances in our understanding of the health hazards posed by depleted uranium and it's high time that the international standards caught up with this research'.”

"The vote comes after a year of intense campaigning by ICBUW and its member organisations, and follows calls by the European Parliament for a ban. In March this year, Belgium became the first country in the world to introduce a domestic ban on the use of uranium in all conventional weapon systems. The decision by Brussels to take this step sent a clear message to all NATO members and users of uranium weapons that the continued use of chemically toxic and radioactive weapon systems is incompatible with international humanitarian legal standards."

As we stated, above, this measure was forced into the public consciousness by the "Movement of Non Aligned States", i.e., the "little people" of the world, many of whom are now suffering the ill health effects of D.U. poisoning. Let us examine some of these little guy nations who supported this measure. The full listing of nations who voted is listed in the ICBUW news story, above, but let us examine some of the more interesting nations who voted to pass this resolution.

* Indonesia submitted the resolution -- This country is one of the most populous of the Islamic nations, and may feel that D.U. warfare is being specifically aimed at Muslim countries.

* Iraq voted "yes" to this resolution. Iraq is the country hit the hardest by D.U. poisoning, as most the D.U. ordinance has been exploded on her soil and in her air. The foreign military doctor who originally warned me about D.U. told me that, in 15-20 years, Iraq will be unlivable, with 90% of her population either dead or dying.

What was the name of the warfare we visited on Iraq? Was it Operation Iraqi Freedom? Now you know the truth of the principle Cutting Edge has been teaching since November, 2001, that you have to look in the opposite direction of the public rhetoric to discover the truth (NEWS1558, "BREAKING OUT OF THE MENTAL BOX -- LEARNING TO THINK IN THE OPPOSITE DIRECTION OF PROPAGANDA TO FIND THE TRUTH")

* Afghanistan voted in favor. While she has not seen the amount of ordinance exploded on her soil as has Iraq, she is poisoned enough to suffer almost a complete loss of her population.

What was the name of Bush's war against Afghanistan? It was "Operation Enduring Freedom"! It has been said often during the 20th Century that the only "freedom" the Communists gave a country when they took it over was the "freedom of the grave"! Only in the grave can a person find freedom from Communism! Similarly, the only "freedom" the people of Iraq and Afghanistan will have from uranium poisoning is the freedom of the grave.

Now you know why Afghanistan and Iraq voted for this measure, when America voted against it.

* Iran - Iran's president has criticized America roundly for its use of D.U. munitions. Living next door to Iraq, Iran is very susceptible to this dust-borne genocide.

* Japan voted "Yes", which is somewhat surprising since she is such a strong ally of the United States and has maintained forces in Iraq. However, Japan is the only victim of American nuclear aggression using standard exploding nuclear bombs, so she is especially sensitive to this issue of uranium contamination.

America lost a lot of support on this vote, from nations who normally support this nation's policies.

We can only hope that the day is coming when the peoples of the world will finally be told the truth, the whole truth, and nothing but the truth about the poisoning of the entire Middle East and much of the world through Depleted Uranium Munitions. If that ever happens, the outrage is going to be so severe that President Bush and members of his Cabinet may find themselves in the docket of the International War Crimes Tribunal, accused of Genocide. However, President Bush cannot be charged as long as he remains in office, so the time frame logically extends into 2009 and beyond.

If this does occur, people of every nation and language will demand to know how a "Christian" President can be responsible for the greatest genocide in world history -- almost one billion people. At this point, genuine Christians will truly be hated by the world, setting up the persecution foretold in prophetic Scripture.

"When the Lamb broke open the fifth seal, I saw at the foot of the altar the souls of those whose lives had been sacrificed for adhering to the Word of God and for the testimony they had borne. They cried in a loud voice, O Sovereign Lord, holy and true, how long now before You will sit in judgment and avenge our blood upon those who dwell on the earth? Then they were each given a long and flowing and festive white robe and told to rest and wait patiently a little while longer, until the number should be complete of their fellow servants and their brethren who were to be killed as they themselves had been." [Revelation 6:9-10; Parallel Bible, KJV/Amplified Bible Commentary)

Truly, the world is rushing into the final days of world history.