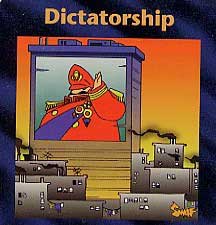 Subtitle: All dictatorships must control all national resources and all waterways. Congress is attempting to sneak an all-encompassing bill through which would extend government control over every tiny bit of water in the country!

Using "war on terrorism as an excuse to declare a state of emergency, suspend civil liberties, and jail political opponents". This quote might have come from Cutting Edge, but it did not! It came from mainline commentator, Ted Rall, writing in Yahoo News! Are the blinders coming off now so people can see the juggernaut hurtling down the tracks?

Immediately after the 9/11 attacks, Cutting Edge began to sound the alarm about President Bush and Attorney General John Ashcroft and their plans to use the "War on Terror" simply as an excuse to overthrow this government and establish a frightful dictatorship. We received many emails from people upset that we could say such a thing, or complaining that we were not "patriotic" enough to back our President going to war, or that we were judging unfairly. Our stance cost us considerable support.

As the months unfolded after 9/11, we saw Congress passing dictatorial legislation, giving the President the kind of powers that Stalin and Hitler wielded. Today, almost seven years later, Congress has passed, and President Bush has signed, dozens of "anti-terrorist" laws which have nothing whatsoever to do with catching any Islamic terrorists, but everything to do with establishing the coming dictatorship known as the New World Order.

With this background firmly entrenched in our minds, let us review this startling new "power grab" by the United States Congress. The purpose of this proposed legislation is to turn the control of nearly every square mile of America to the Federal Government. You and your Private Property can be seized by the government at will.

"Having been slapped down by the U. S. Supreme Court's recent decision that the words 'navigable waters' in the Clean Water Act limited federal agencies to regulation of navigable waters only. Democrats and liberal Republicans in Congress are striking back. They are attempting to pass the Clean Water Restoration Act of 2007 (HR2421 and S1870) that would amend the 1972 Clean Water Act and replace the words 'navigable waters' with 'waters of the United States'. Further, it defines 'waters of the United States' with such breathtaking scope that federal agencies would be required to regulate use of every square inch of the U.S., both public and private."

Lest you believe this author is engaging in scare tactics, in hyperbole, let us go to the official government website to see the exact wording of this bill.

"To amend the Federal Water Pollution Control Act to clarify the jurisdiction of the United States over waters of the United States ... SEC. 4. DEFINITION OF WATERS OF THE UNITED STATES ... `(24) WATERS OF THE UNITED STATES- The term `waters of the United States' means all waters subject to the ebb and flow of the tide, the territorial seas, and all interstate and intrastate waters and their tributaries, including lakes, rivers, streams (including intermittent streams), mudflats, sandflats, wetlands, sloughs, prairie potholes, wet meadows, playa lakes, natural ponds, and all impoundments of the foregoing, to the fullest extent that these waters, or activities affecting these waters, are subject to the legislative power of Congress under the Constitution'."

(2) in section 304(l)(1) by striking `NAVIGABLE WATERS' in the heading and inserting `WATERS OF THE UNITED STATES'; and

(3) by striking `navigable waters' each place it appears and inserting `waters of the United States'."

As you can see, the change in wording from the 1972 Clean Water Act and the Federal Water Pollution Control Act (33 U.S.C. 1251 et seq.) is striking. Whenever you go from specified language to the inclusive word, "all" or when you go from `navigable waters of the United States' to the all-inclusive "`WATERS OF THE UNITED STATES' ", you are dramatically enlarging the scope and the reach of the Federal Government!

Since this government will eventually give way to the most severe, repressive Total Dictatorship the world has ever seen, this kind of changing of the laws is very, very serious. Let us now return to our featured article for more information.

"Obviously, those behind this legislation have only contempt for the Constitution, limited government and private property rights."

We can only say, 'Amen" to this interpretation. Private Property Rights is one of the major keystones of our Constitutional Republic and is most definitely targeted for extinction as the world transitions to the New World Order.

Let us go back to the quote from the official Senate website, as we need to point how exactly how thorough this legislation is intended to be.

When the language of this bill says that its coverage extends even to "prairie potholes", you know that the framers of this legislation intend for the Federal Government to control virtually every square inch of America. But, even this type of legislation is simply enacting the kind of control which the Protocols of the Learned Elders of Zion envisioned.

"These laws will withdraw one by one all the indulgences and liberties which have been permitted ... and our kingdom will be distinguished by a despotism of such magnificent proportions as to be at any moment and in every place in a position to wipe out any ... who oppose us by deed or word." [PROTOCOL 5 -- DESPOTISM AND MODERN PROGRESS, The Protocols of the Learned Elders of Zion]

Did you catch the kind of dictatorship [despotism] that the Illuminati has planned for every nation once they are brought under the rule of Antichrist?

"... a despotism of such magnificent proportions as to be at any moment and in every place in a position to wipe out any ... who oppose us by deed or word."

Once they have full control, they plan on "wiping us out".

If this legislation passes, your Private Property will come under the control of the United States Government. You will live on your property only until such time as some official decides the time has come to evict you. At that moment in time, the gates of some specially prepared prison will likely open for you and your family.