Title:  Iranian President Ahmadinejad Revealed To Be A Freemason! Another Reason That Iran Will NOT Be Invaded or Attacked!

Subtitle: Proof positive that Illuminized Freemasonry controls both sides of any conflict. President Ahmadinejad is one of the Global Elite and, as such, his country will not be prevented from playing the role which Biblical prophecy has assigned it.

Proof positive that the conflict between the West and Iran is staged according to the principles of the Hegelian Dialectic! 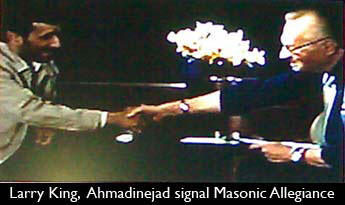 Iranian President Ahmadinejad is a Freemason!

"When you shake hands, the thumb naturally extends upward or straight ahead. When it points downward, you are signaling that you are a member of the world's largest satanic cult, Freemasonry, and are committed to its goal of world government under the anti Christ. Read what Stephen Knight wrote about the Masonic handshake in "The Brotherhood" (1983): 'The Master Mason applies distinct pressure with his right thumb between the knuckles of the other's middle and third finger'." (p. 132)

This information is absolutely correct! When Larry King gave Iranian President Ahmadinejad the Masonic handshake, he was signaling to all the occult world that the Persian leader is a member of the Masonic secret society. Therefore, all occultists throughout the world will know that the Iranian President is being controlled by the Illuminati and is simply carrying out his assigned script. Therefore, we must realize that this handshake is also confirmation that the entire Iranian crisis over their supposed nuclear warhead development program is a scripted crisis in which the leadership of Russia, Iran, Israel, the United States, Great Britain, and the European Union all have a role to play.

In other words, the deliberately created crisis with Iran is following a script that will result in massive amounts of "Rumors of War" without actually descending into war. This reality is the reason that President Bush and his officials have breathed fiery threats time after time after time for five long years without any resulting military action. This fact is the reason why massive American naval and air forces have built up in the waters and in the air near Iran since Summer, 2003, only to quietly disband every single time.

What are the purposes of the secret Masonic handshake?

Original Genesis of the Masonic Handshake

We need to go back to the book by John J. Robinson, "Born In Blood", to pick up this historical story.

By carefully examining Masonic teachings, their rituals, and their language origins, Robinson concluded that, "when Pope Clement V conspired with King Phillip of France in 1313 to arrest, try, and annihilate the Knights Templar, some French Templars did escape. Furthermore, Templars in other countries, most notably Britain, were able to escape the dragnet. They gravitated to Scotland, where the Scottish King refused to enforce the Papal Bull against the Templars. Accepting other Templars into their new secret order, and very fearful of betrayal, they did evolve into the Freemasonry we know today. The traditional secret society emphasis on signs and handshakes, and the keeping of secrets makes much sense, as lives were literally at stake." ["Born In Blood"; Page 150-1]

However, the historic roots of this practice of handshakes can be traced all the way back to Biblical times, when the Babylonian secret societies dominated the occult world. Listen to the Biblical admonition against secret handshakes.

Proverbs 22:26 -- "Be not one of those who strike hands and pledge themselves ..." Once again, we discover that, if a person is thoroughly familiar with the commandments of the Bible, he would never be taken in by the lying nature of Freemasonry. As soon as they discovered the bloody oaths they were required to take, and the secret handshakes they were required to learn and practice, and the very fact that Masonry has deep, deep, dark secrets they are most afraid to make public, the Christian would immediately walk out of the Lodge, never returning. Further, he would shout the warning to the rooftops that Freemasonry is not, will not ever be, nor ever was, Christian. 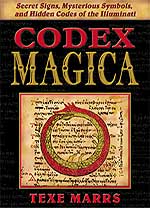 Usage of the Masonic Handshake In The Modern Era

"The secret hand signs of the Illuminati are thought to work magic, to evoke supernatural beings, and of course, to communicate messages ... The handshake, or grip, is a sign of unity, oneness of purpose and allegiance or devotion to a joint cause. It is considered a bond or seal of acknowledgment between Illuminist brethren. The Masonic authorities speak of a 'mystic tie' or spiritual union. Certainly, demon powers do congregate together and enjoy one another's foul company." (Texe Marrs, Codex Magica, p. 145)

Did you catch the pertinent information in this definition? Masonic handshakes accomplish the following:

At the very end, Marrs reports that Masonic handshakes are demonic.

Now, let us examine some other modern examples of Masonic handshakes. 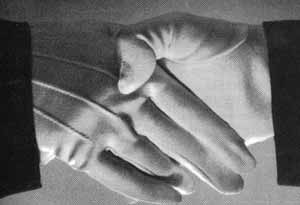 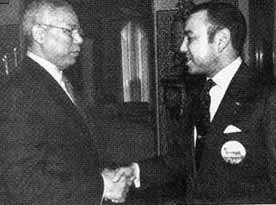 The picture on the left depicts the Masonic handshake perfectly. Note the position of the thumb over the finger of the hand on the left in this picture; it is distinctly cocked and uniquely positioned over the knuckle of the first finger. This is the perfect Masonic handshake. In reality, the accuracy of the handshake depends upon the skill of the person giving, or receiving, the handshake. Some Masons do a good job and some Masons do a lousy job.

The picture on the right shows Secretary of State Colin Powell exchanging a Mason handshake with Morocco's King. The King is giving General Powell a very good handshake, as his thumb is clamped on Powell's first knuckle at just the correct angle.

There can be no doubt about the fact that Iran's President is a Mason and that Larry King wanted to flash that fact to all discerning members of the Fraternity worldwide. You can thus add one more reason to the long list Cutting Edge has provided as to why a Western attack on Iran will never happen!

Jesus was certainly right when He predicted:

"Jesus answered them, Be careful that no one misleads you, deceiving you and leading you into error. For many will come in (on the strength of) My name, appropriating the name which belongs to Me, saying, I am the Christ (the Messiah), and they will lead many astray. And you will hear of wars and rumors of wars; see that you are not frightened or troubled, for this must take place, but the end is not yet. For nation will rise against nation, and kingdom against kingdom, and there will be famines and earthquakes in place after place; All this is but the beginning [the early pains] of the birth pangs of the intolerable anguish." (Matthew 24:4-8, Parallel Bible, KJV/Amplified Bible Commentary; emphasis added)

This scenario, carried out on a massive global scale, is nothing more than a fulfillment of the "Rumors of Wars"!

Truly, the daily events of the day demonstrate the fact that the peoples of the world are steadily moving towards the final wars which shall place Antichrist on the world scene. Are you spiritually ready? Is your family? Are you adequately protecting your loved ones? This is the reason for this ministry, to enable you to first understand the peril facing you, and then help you develop strategies to warn and protect your loved ones. Once you have been thoroughly trained, you can also use your knowledge as a means to open the door of discussion with an unsaved person. I have been able to use it many times, and have seen people come to Jesus Christ as a result. These perilous times are also a time when we can reach many souls for Jesus Christ, making an eternal difference.