Title:  Russian Diplomatic Professor Predicts America Will Break Up Into 6 Separate Divisions Because of Economic Stress

Subtitle: The Illuminati DOES INDEED have a plan to break North America up into 6 Military Patrol Zones!

America Breaking Up Into Six Parts?

A Russian diplomatic professor has "let the cat out of the bag" concerning a portion of the Illuminati Plan which I had always felt was quite a ways into the future. However, in light of this revelation by a Russian who has access to the highest level of diplomacy might signal that the plan to divide America into 6 zones could very well be closer in the future than I had anticipated.

This professor teaches at the Diplomatic Academy of the Russian Ministry for Foreign Affairs, a highly placed academy which trains Russians to be diplomats. Of course, such an academy would be very tightly controlled by the global Illuminati, as you will realize when you read the write-up from the hotlink provided, above.

"A professor at the diplomatic academy of Russia’s Ministry of Foreign Affairs said the U.S. will break into six parts because of the nation’s financial crisis. 'The dollar isn’t secured by anything', Igor Panarin said in an interview transcribed by Russian newspaper Izvestia today. 'The country’s foreign debt has grown like an avalanche; this is a pyramid, which has to collapse'. Panarin said in the interview that the financial crisis will worsen, unemployment will rise and people will lose their savings -- factors that will cause the country’s breakup."

At this point, the professor defines the approximate geography which these 6 areas will encompass.

"The U.S. will fracture into six parts: the Pacific coast; the South; Texas; the Atlantic coast, central states and the northern states."

While the Illuminati Plan does not foresee splitting the United States into six parts, their Plan does envision splitting the North American Union into six military patrol zones! Let us refer to this map, below. Prepare to be shocked. 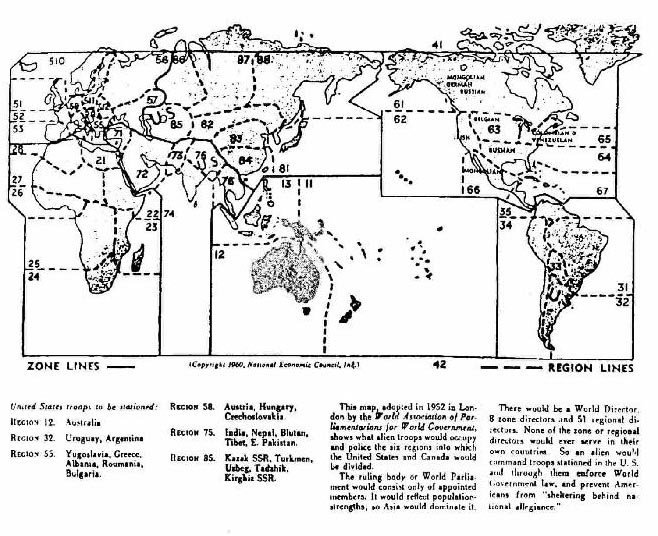 Let us now examine the troops that are to be stationed in North America according to this 1952 plan.

2.  Southern America all the way to California -- Russian troops. The line begins at Virginia and goes straight West to the border of California.

6.  Mexico -- Mongolian [Chinese] troops.  I find it highly interesting that the Mexico portion over which the Chinese are to exercise control includes San Diego, California!  The Clinton Administration tried to give the Chinese Communists control over an "abandoned" U.S. Naval base, in Long Beach, but was stymied because of intense Conservative opposition.  Now you know even more conclusively that Clinton and Congress were part of this 1952 Plan, and are acting entirely at the control of the Illuminati to end American sovereignty and unite the world under the banner of the coming Antichrist.

Foreign troops would be in total control of the entire North American continent.  No sizeable American troops would be allowed in this country.  Then, what needs to happen to the 1,146,959 American troops now stationed in this country?  They will either have to be disbanded or deployed overseas. Is this the reason that America is now bogged down in wars in Iraq and Afghanistan? Is this the reason the American military is stationed in far-flung deployments around the globe?

Already, we are hearing reports that the American military is overburdened and strained beyond their capability because of Bush's demands upon them. If a crisis erupts which demands military forces to restore order, the American military might be so strained that it must call upon United Nations forces to restore order. Indeed, Henry Kissinger boldly stated that this was the ruse by which U.N. forces would be stationed on American soil. Former Secretary of State Henry Kissinger -- one of the most high-ranking Illuminists today -- let the cat out of the bag for anyone who knew of the Plan. During the Rodney King rioting in Los Angeles, Kissinger made this following statement:

"Today, Americans would be outraged if U.N. forces entered Los Angeles to restore order. Tomorrow, they will be greeted."

A more succinct statement of this part of the New World Order Plan is not possible! Henry Kissinger has just stated the full and complete Plan for his listeners, but since most Americans do not know this part of the Plan, Kissinger's remarks flew right above the heads of most.

Do not be deceived: the United States is not only going to voluntarily give up its sovereignty, its leadership is going to voluntarily allow foreign troops to enter so as to impose military rule! Every time you see the United Nations intervene militarily somewhere else in the world, you can know for increasing certainty that America's time for such intervention draws ever nearer.

In the past decade, I have heard many unsubstantiated claims that foreign troops have been sighted training in this country.  However, I never knew of this 1952 plan at that time, so I never placed much confidence in these claims.  We shall be more vigilant in researching this aspect.

We believe that this Russian "diplomatic professor" is highly placed enough in the Russian hierarchy that he knows the specifics of the Illuminati Plan. He has revealed the plan to split North America into six zones; however, these six zones will not be economic but military. Revelations like these make us ever more aware that the final end of all things is drawing near!