Title:  Warning To All Pastors of Tax Deduction (501C)-3Churches! The Federal Government Is Moving To Control You and Your Church

Subtitle: The Federal takeover of the banking, insurance and auto industries is only the tip of the iceberg. The government already has a legal right to control any (501C)-3tax charitable organization, so the time seems right for pastors to get that dreaded knock in the middle of the night from the anti-christian government censor.

Pastors, how will you respond? You were foolish enough to get your church in this predicament. What will you do now? 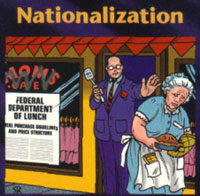 As my granddaddy used to say, "The times, they are a'changin"!

Yes, they are a'changin'. Under President Obama, the face of the Federal Government is changing rapidly. We demonstrate in NEWS2317, entitled, "Financial Coup Completed: American Economy Now A Tightly Controlled, Severely Regulated Economy", that the financial crisis which erupted in mid-September, 2008, provided President Bush the opportunity to overthrow the Capitalist system so that the planned Fascist economy could be set in place.

President Obama has taken this Bush initiative to its planned goal of gaining enough Federal Government control over the key companies in the Banking, Insurance, and Automotive industries that they can control the entire industry. This end agenda has been the plan for the past 100 years, and the time for full implementation is now at hand. As the Illuminati Card Game card, "Nationalization" shows, the government plans on controlling businesses down to the individual "Mom & Pop" stores. In this card, the government agent is standing in the doorway watching a very distressed Grandma leaving her restaurant with her last pie in hand.

What is the sign in the window? "Federal Department of Lunch".

The Federal Government is also taking the leadership role in pushing the radical agenda of Global Warming, even though scientific evidence abounds that the entire issue is bogus. When these "Green Laws" are finally passed, the Federal Government will have its filthy tentacles wrapped around virtually every single business in America.

The Federal Government is about to force itself into the controversy over Gun Registration and Control. The latest mass gun crimes which have afflicted America lately will provide the Government the opportunity to force severe registration and eventually, to force gun seizure. 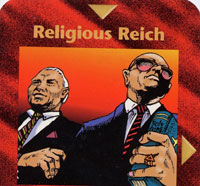 Now that the Federal Government is conditioning people to accept the large-scale intrusion into areas of our country which had traditionally resisted government control, we must accept the reality that the time may be getting very close to gaining control over one area where the Illuminati has always wanted control: America's Churches!

As the Illuminati Card Game card, "Religious Reich" demonstrates, what the Federal Government wants to establish are government churches, not independent Bible-believing churches. When Hitler began his church crackdown, his agents began to visit congregations to listen to the sermons emanating from the pulpits. Lists were made of pastors who were refusing to toe the Nazi Party line, and within a year, such pastors were getting that dreaded "Knock on the Door" by Nazi Party thugs.

Very soon, every single pastor who stayed true to the Holy Word of God was in prison. His place in the pulpit was taken by a "minister" licensed by the Nazi State and completely obedient to the Nordic God-in-flesh, Adolf Hitler. Along the way, three prominent Protestant Theologians brilliantly laid the case out to pastors, deacons and elders of the churches why they should support the policies of the Fuehrer. This sad fact is captured in the DVD to the right, "Theologians Under Hitler".

This DVD has been among our best-selling since we introduced it two years ago. You see, increasing numbers of people now understand that the New World Order into which our leaders are driving us in Neo-Nazism to the core. Until our economy was transitioned from Capitalism to the Fascist Economy set up by Hitler and Hirohito, many people could not believe our warnings that the world was heading for a global Nazism known as the "New World Order". But, now, so many more people can see the truth.

We also recommend you read the book, "They Thought They Were Free: The Germans, 1933-45". This book chronicles how Hitler captivated the entire German people, including the Christian Churches. This reading will certainly fascinate you. And, you will see parallels between Hitler's Nazi Germany and the coming New World Order.

How will the American Federal Government bring the Christian Churches under its thumb quickly and relatively easily?

The trap has already been set and too many churches are already caught -- whether they know it or not.

You see, the Federal Government set up the Tax Charitable Church (501c-3) as a massive trap. The Christian pastor loves this designation because his people who give to his church receive a government tax write-off. Immature pastors believe this tax write-off encourages giving.

However, the Federal Government receives much, much more in return.

The government revels in the fine print of any agreement, and this one is no exception. Under the terms of the (501C)-3 tax code, the government can impose censorship on any pastor who continues to preach and teach things which the government does not want to be taught from the pulpits and the Sunday School classrooms. The government has been very slow to show its teeth in this matter, but the Cutting Edge Treasurer -- a Certified Public Accountant -- sounded the alarm in June, 1998, that he had learned that the IRS was planning to start cracking down on all (501C)-3 ministries, forcing them to say certain things and refrain from saying other certain things.

Cutting Edge was disbanded as a (501C)-3 ministry and reopened as an 'S-Corp'. We were determined that no government agent was going to tell us what we could and could not say. Freedom of speech is absolutely critical to this ministry. Liberal Christian ministries pose no problem whatsoever for government authorities; they are concerned only with Fundamental, Bible-believing ministries.

When will the government begin this crackdown? We believe this crackdown may have already begun -- in the immediate aftermath of the attacks of 9/11. I noticed that virtually all the Fundamental, Bible-believing pastors became very compliant and very quiet right after 9/11. Many pastors openly supported government action and many told their people that President Bush was a Born-Again Christian. I wondered then, and am convinced now, that the reason so many Fundamental, Bible-believing pastors adopted pro-government positions after 9/11, and why so few pastors preach End Times prophecy anymore, is because the government silently informed the pastor that he was expected to say certain things from his pulpit and was expected not to say other things, or he would instantly lose his tax-exempt status.

Because most pastors today are spiritually immature enough to believe that their donations will dramatically decrease if their people cannot claim a deduction any longer, they are intimidated into silence.

But, you have seen nothing yet! The time is coming really soon when the government will start putting pastors and other church leaders into prison should they dare preach the Word of God instead of the government drivel. When pastors are either intimidated into following the government edict or are inside a jail cell, they will have only themselves and the 501(C)-3 tax exempt status to blame.

This portion of the tax code was a trap all along and now the time is arriving soon for it to be sprung all the way! Are you spiritually ready? Is your family? Are you adequately protecting your loved ones? This is the reason for this ministry, to enable you to first understand the peril facing you, and then help you develop strategies to warn and protect your loved ones. Once you have been thoroughly trained, you can also use your knowledge as a means to open the door of discussion with an unsaved person. I have been able to use it many times, and have seen people come to Jesus Christ as a result. These perilous times are also a time when we can reach many souls for Jesus Christ, making an eternal difference.

Copyright © 2009 Cutting Edge Ministries. All rights reserved. This password protected article and its contents are protected under the copyright laws of the United States and other countries. This article is provided by subscription only for use by the subscriber and all other rights are expressly reserved by the copyright owner. Copying and pasting this article, in whole or in part, into e-mails or as attachments to e-mails or posting it on the Internet is strictly prohibited and may subject the offender to civil liability and severe criminal penalties (Title 17, United States Code, section 501 and 506).