Title: Is The Republican Party Getting Ready To Cave To The President On Illegal Immigration?

Subtitle: We might be seeing the beginning of the final stage to form the North American Union -- Supernation #1 of the Club of Rome Plan.

God foretold in Daniel 7:7-8 -- over 2,600 years ago -- that the nations of the world would be reorganized into exactly 10 supernations, each with a leader, as a requirement and a precursor to the appearance of Antichrist. Let us review this prophecy:

""After this I saw in the night visions, and behold, a fourth beast [the Roman empire]--terrible, powerful and dreadful, and exceedingly strong. And it had great iron teeth; it devoured and crushed and trampled what was left with its feet. And it was different from all the beasts that came before it, and it had ten horns [symbolizing ten kings]. I considered the horns, and behold, there came up among them another horn, a little one, before which three of the first horns were plucked up by the roots; and behold, in this horn were eyes like the eyes of a man and a mouth speaking great things." (Daniel 7:7-8; Parallel Bible, KJV/Amplified Bible Commentary) 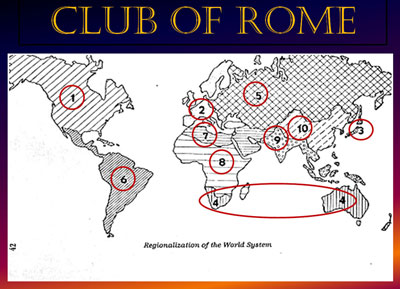 Daniel 2:44 makes it quite clear that, just as God's final kingdom will cover the entire earth, the kingdom of the collective final 10 kings will encompass the whole world. Therefore, we are looking for the establishment of a worldwide final kingdom which numbers only 10 super-nations, symbolized in this passage as kings, or horns. Since there are nearly 200 different nations in the world today, what we should expect to see is a movement to group these nations together so that the final number equals precisely 10!

The Illuminati published just such a global reorganization plan in 1974 in a book entitled, "Mankind At The Turning Point".

What is their collective grouping together of all nations of the world into exactly 10 nations?

The Illuminati has made one tiny change to this map. They plan now to include Mexico with Supernation #1 -- North America -- instead of lumping her into Supernation #6, Central and South America.

No one has ever explained this before. Now, you can understand why Presidents as seemingly dissimilar in world view, style and philosophy as Presidents George H.W. Bush, William Clinton, George W. Bush, and Barack Obama could support the creation of the North American Union. President George H.W. Bush began the push to create NAFTA, but was unable to see it created before he left office. President Clinton supported NAFTA, even though he opposed nearly every other thing for which Bush stood. The Clinton/Bush team pressured Congress to pass NAFTA in 1993.

Most Americans do not realize that, one day, all citizens of Mexico, the United States, and Canada will be proclaimed, "Citizens of the North American Union". At that point, America will have instantly "solved" its problem of illegal immigration. People living in Mexico City will be the same citizen as people living anywhere in the United States!

This obscure fact is the reason that it looks like we are not enforcing our border with Mexico. Most Americans look aghast at our loose border patrolling and wonder why we give illegal immigrants medical insurance and allow them to vote. The reason for this confusion is that the average American citizen does not realize the true agenda which the American, Mexican and Canadian governments are following. In their minds, the borders currently showing on all maps between Canada/United States and Mexico/United States have been eliminated!

No leader has yet told his people.

The problem is how to move all peoples of the North American Continent to a place where they can someday be declared citizens of the North American Union. For years, Democrats and Republicans have been on opposite sides of this issue. Democrats are pushing for blanket legalization of all immigrants, while Republicans want to seal our border with Mexico and even deport many home.

This standoff has rightly been called an "Immigration Wall".

Now, after the reelection of Barack Obama, we might be seeing enough of an attitude of compromise that will allow for a temporary status for immigrants, who would go from "Illegal" to "Legal". They would not yet be American citizens but they would move closer to being declared "North American citizens.

Let us now review current news to see how this move toward compromise might now be on its way.

"Well, that was fast.

"Just two days after President Barack Obama sailed to re-election over Mitt Romney, boosted by more than 70 percent of the Latino vote, some Republicans are striking a new tone on illegal immigration. Conservative Fox News and radio host Sean Hannity said Thursday that his views on immigration have "evolved."

"One day after the GOP suffered a crushing presidential defeat that spotlighted the party's unpopularity with Latino voters, Fox News star Sean Hannity announced that his position on undocumented immigrants had "evolved" and that he now supports a pathway to citizenship."

This statement is crucial to our understanding of the dynamics of the political situation right now, immediately after the election. The key is to reach an agreement which would lead to a "pathway to citizenship". What citizenship? I do believe the interim step to which the two parties will agree is to legalize immigration. I cannot imagine that Republicans would vote outright to grant illegal immigrants American citizenship, as that would be too bold a step for their constituents.

Most probably, the interim step would be to simply legalize immigrants currently in this country.

Now, let us return to our featured news article:

"Democrats and Republicans have not seen eye to eye on immigration in the past few years. In 2010, the DREAM Act, legislation that would have provided some undocumented immigrants a pathway to citizenship, failed to secure enough Senate votes during a lame-duck session, largely as a result of GOP opposition. Republicans in the last Congress then adopted a harsher tone on the issue than their predecessors. President Obama bypassed them altogether in June when he announced that his administration would stop deporting undocumented immigrants under 30 who had arrived in the United States before the age of 16."

Latino leaders certainly believe the defeat of Mitt Romney has created a possible solution to this problem.

"Latino voter and advocacy groups have said they expect both Obama and congressional Republicans to work together to pass immigration reform in 2013. Eliseo Medina, secretary-treasurer of the Service Employees International Union, told reporters that Latino voters had sent a message to Obama. 'We expect leadership on comprehensive immigration reform in 2013', he said. 'To both sides we say: 'No more excuses.'"

We shall watch this scenario develop with great interest, because the formation of the North American Union carries prophetic End of the Age significance.

1) According to Daniel 7:7-8, Antichrist cannot arise until the nations of the world are reorganized into 10 supernations

2) The North American Union must be formed officially for the Club of Rome plan to be completed.

3) The North American Union cannot be formed until the illegal immigration problem is solved and that requires an interim step of making all illegal immigrants completely legal.

This news is important because it fulfills prophecy, alerting us to the reality that the appearance of Antichrist is getting closer all the time.

'Are you spiritually ready? Is your family? Are you adequately protecting your loved ones? This is the reason for this ministry, to enable you to first understand the peril facing you, and then help you develop strategies to warn and protect your loved ones. Once you have been thoroughly trained, you can also use your knowledge as a means to open the door of discussion with an unsaved person. I have been able to use it many times, and have seen people come to Jesus Christ as a result. These perilous times are also a time when we can reach many souls for Jesus Christ, making an eternal difference.

Copyright © 2012 Cutting Edge Ministries. All rights reserved. This password protected article and its contents are protected under the copyright laws of the United States and other countries. This article is provided by subscription only for use by the subscriber and all other rights are expressly reserved by the copyright owner. Copying and pasting this article, in whole or in part, into e-mails or as attachments to e-mails or posting it on the Internet is strictly prohibited and may subject the offender to civil liability and severe criminal penalties (Title 17, United States Code, section 501 and 506).