Subtitle: If the Government is ever forced to admit that soldiers by the tens of thousands are dying from exposure to our own weapons, Presidents Bush and Obama and many of their officials could be charged with "Crimes Against Humanity" at the International War Crimes Tribunal!

Cutting Edge Ministries has long maintained that the extensive use of Depleted Uranium (D.U.) munitions in Iraq and Afghanistan ranks as the Number One war crime of which the Bush Administration is guilty. Once a D.U. round hits its target, the dense D.U. material literally explodes into fine dust -- a dust which is breathed in by civilians and soldiers alike. After just one tiny, tiny D.U. speck of dust settles within the human body -- usually within the lungs -- it begins to emit radiation throughout the body 24 hours per day, 7 days per week.

The result is death in nearly 100% of the cases. The time period it takes from inhalation to death differs for every person, but is generally between 18 months to 20 years. Infected persons can pass this uranium sickness to their intimate partner and children can be born genetically deformed.

Literally, D.U. contamination of the type now being perpetrated in Iraq and Afghanistan will kill almost the whole populations. In Summer, 2003, a foreign military doctor trained in modern desert warfare warned me over the phone that Iraq was going to be uninhabitable within 20 years and that virtually every soldier who had served in the theater would eventually die, along with his wife and/or girlfriend.

We have posted so many articles on Depleted Uranium that we have created an entire section. If you are not familiar with the properties of Depleted Uranium, or how it might be fulfilling Bible prophecy, or how extensive the spread of D.U. dust is throughout the entire Middle East, please take the time to read these articles and consider the bookstore resources available. The rest of this article is going to presume that you have a minimal understanding of this deadly weapon which is dooming civilians and our soldiers to a very slow, very painful death.

Iraq, the Middle East and most of the "Non-Integrating Gap" region of the world now have suffered 11 years of steady health deterioration since President George W. Bush ordered American forces to lead an invasion into Iraq. Today, many thousands of Iraqi citizens are slowly dying, their cancer rates are astronomical, and their babies are being born deformed -- just like the "foreign military doctor" predicted in 2003.

But, her prediction that almost every American soldier would also be killed by some form of uranium poisoning is also coming true. Recently, news stories have broken that thousands of sick American veterans are being routinely denied medical care at the Veterans Administration Hospitals. The nature of the illnesses has not been made public, until now.

This news story confirms that what this military doctor lamented in 2003 is truly coming to pass right here and right now. Our boys are dying and the Government cannot admit that American uranium weapons are responsible. If government officials admit the truth, Presidents Bush and Obama and their Cabinet Officials could be going to the War Crimes Tribunal!

Let us review this story.

"New research shows an unique type of titanium-filled dust, found at Camp Victory in Iraq, has been discovered in the lungs of several Iraq War veterans suffering from respiratory problems. Dr. Anthony Szema of Stony Brook School of Medicine told USA Today that the sick veterans originally came into his VA-run allergy clinic because they were suffering from shortness of breath: 'We biopsied several patients and found titanium in every single one of them. It matched dust that we have collected from Camp Victory...'

How does a soldier inhale metal? The answer is obvious: the metal has to have been reduced to a dust so it could pass into their lungs.

These doctors concede that virtually every single sick soldier has been found with high levels of "titanium" in their lungs! Titanium is part of the Depleted Uranium Warhead! Our soldiers are dying of uranium poisoning caused by exposure to our own weapons.

But, the good doctor is not willing to admit that Depleted Uranium weapons were at fault. He looks around to find something else to upon which to pin this blame.

"Szema says there are a few theories floating about as to what caused this unique, metal-filled dust: It may have been created by burn pits used to eliminate everything from Styrofoam to vehicles to computers to unexploded ordnance in both Iraq and Afghanistan. At Balad Air Base in Iraq, workers burned 240 tons of trash a day in an open pit a mile from servicemembers' sleeping quarters."

Trying to say that this titanium came from burning pits of trash is nonsense. The reality is that titanium is an integral part of Depleted Uranium munitions.

Therefore, the Americans use an alloy in Depleted Uranium munitions that contains 78% more titanium than the British D.U. rounds.

By admitting that our boys' lungs have "a lot" of titanium, this V.A. doctor skirted right up to the ledge of admitting that Depleted Uranium is the source of the numerous illnesses suffered by our brave heroes who sacrificed their health and their lives to fight a war which was totally unnecessary and which was launched on a massive sea of lies.

American citizens today need to question everything and place no confidence in any of their elected leaders. Every American who questioned Bush's rationale for attacking Iraq probably refused to join the military, thus keeping their precious body and mind from the Iraq and Afghan war theaters. Therefore, they were never exposed to this D.U. disaster.

Additionally, do not be deceived into thinking that only soldiers living in and around Camp Victory are the ones getting sick. Depleted Uranium has been exploded all throughout Iraq, covering that poor country with fatal doses of uranium poisoning. But, there is even more horror! Undoubtedly, you have seen movies based in the Middle East, where incredibly powerful dust storms rip through the country several times a year. These storms pick up soil contaminated with uranium and carry it hundreds of miles from the original battlefields.

Once reading this article, you will discover what our poor heroes are facing at home, alone, dying a very painful, expensive death, and discarded by the very military which greeted him/her with such flowery language at the beginning. To learn more about this insidious uranium contamination and how our own military so cruelly doomed tens of thousands of young servicemen to death, please read the articles in this section. 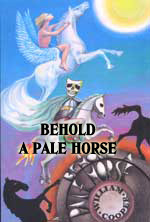 If you cannot understand how our military and political leaders could so callously and deliberately send our young men to their deaths, you do not comprehend what they think of the vast majority of us. Listen to one New Age author describe the attitude of our leaders:

"Those who will not use their brains are no better off than those who have no brains, and so this useless school of jelly-fish, father, mother, son, daughter, become useful beasts of burden or trainers of the same." ["Behold A Pale Horse", p. 64]

"All science is merely a means to an end. The means is knowledge. The end is control . Beyond this remains only one issue: Who will be the beneficiary? ...a nation or world of people who will not use their intelligence are no better than animals who do not have intelligence. Such people are beasts of burden and steaks on the table ..." ("Behold A Pale Horse", by Milton William Cooper, Light Technology Publishing, Sedona, AZ, 1991, p. 39)

How do YOU like being referred to as 'beasts of burden' and 'steaks on the table? You know what has to happen to the beast of burden, in order for it to become a steak on the table!!

Let us hope and pray that this awful truth that tens of thousands -- and maybe more -- of our service men and women who served in Iraq and Afghanistan will finally know the truth as to why their loved ones are suffering so silently. Then, perhaps, an alarmed and angry public will successfully demand Justice against those Illuminati leaders who deliberately poisoned the flower of our nation's youth.

This kind of callous attitude is precisely what the Bible foretold would happen at the End of the Age.

Copyright © 2014 Cutting Edge Ministries. All rights reserved. This password protected article and its contents are protected under the copyright laws of the United States and other countries. This article is provided by subscription only for use by the subscriber and all other rights are expressly reserved by the copyright owner. Copying and pasting this article, in whole or in part, into e-mails or as attachments to e-mails or posting it on the Internet is strictly prohibited and may subject the offender to civil liability and severe criminal penalties (Title 17, United States Code, section 501 and 506).